Sylvia Plath?  That’s right, we’re back over to Mrs. Gunderson’s for another not-quite-Judge Death story.  As ever, this one features someone dressed as Judge Death but it’s not exactly the same thing we’re used to as this one isn’t about one of Mrs. Gunderson’s actors succumbing to more method acting madness.

That said, there’s not really much here to get excited about if you’re a hardcore Judge Death fan (and that’s why you’re here, right?) as it’s more about the humour.  Mrs. Gunderson is great as ever but the focus here is on her robot, Walter, and the guy dressed as Judge Death.  It’s a perfectly fine story and Colin MacNeil’s art is nice and stylish but chronologically speaking, the game was about to evolve as Dark Justice was next up and so this kind of Death-related silliness feels a decade out of date.

A Night in Sylvia Plath opens with Judge Dredd being called to a supermarket where Walter, the robot that he used to own but now is the assistant to Mrs. Gunderson, is creating havoc.  Walter is malfunctioning and causing a disturbance.  Dredd warns him but Walter doesn’t recognise him and says that’ll he’ll call the Judges on Dredd himself.

As Walter leaves, Dredd is contacted by Control who inform him of a burglary that fits a recent pattern where the perpetrator is dressed as Judge Death.  It happens to be at the Sylvia Plath block where Walter and Mrs. Gunderson reside.

The story then is told by the robber himself who explains how he got the idea when he was selling bibles door to door.  He realised who were the easy marks and figured that he’d come back dressed as Judge Death, knowing they’d probably fall for it.  Unfortunately it worked a little too well and one of his victims had a heart attack and died, leading the robber to lay low for a while and return to selling bibles.  But that didn’t work out too well and he decided to don the costume once more.

Back in action, the robber knocks on the door of Mrs. Gunderson.  Walter is still malfunctioning and therefore completely non-plussed while Mrs. Gunderson welcomes the robber in thinking he’s Jay De’Ath (her previous tenant who was actually Judge Death – her vision isn’t the best).

As Mrs. Gunderson and Walter thoroughly confuse the robber, Dredd is on his tale.  The robber goes into Judge Death’s old room where a tour party are visiting.  He’s scares them all out of there and the noise is enough to alert Judge Dredd who comes in to investigate.

They pass in the corridor but when Dredd remembers that Mrs. Gunderson is no longer allowed to hire actors to play Judge Death (on account of them all going mad) he realises that this must be the robber and he arrests him.   He then gets Walter reprogrammed and all is right with the world once more.

This story hasn’t been reprinted, so you’ll need to track down the two Progs to get hold of it. 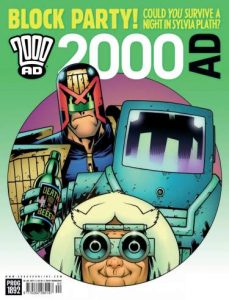