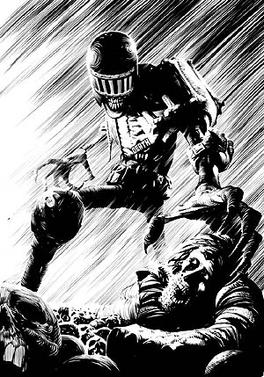 Judge Death is Judge Dredd’s most deadly enemy and was created by John Wagner and Brian Bolland in 1980, three years into 2000 AD’s marathon run.  He has featured in over forty stories since both as part of a main timeline but also in alternative timelines and other appearances.

A year ago I attempted to read through the entire timeline for the first time.  I’ve got a collection which includes most of the trade paperbacks and various issues that Death features in but soon found that between all of the reprints, progs, special editions and Megazines, keeping track of Death’s timeline is ridiculously difficult.

While Death had a pretty decent Wikipedia page (since taken down by Wikipedia for literally no good reason) and the 2000 AD Barney database helped fill in some gaps, there isn’t a definitive page out there that tracks his attempted conquest of all things living.

So I’ve created The Judge Death Files as an attempt to get on top of his timeline and provide links to anyone else who wants to read the entire history of the best comic character ever created.   The bibliography covers every comic strip appearance that I’ve been able to track down.

I hope you enjoy the site.  We’re open to any comments (especially if we’ve missed any stories, please let us know).

Copyright notice:  obviously all the images used on this site are copyrighted by 2000 AD and are used for review purposes only.