First published in progs 149-151 in 1980 in black and white.  Republished multiple times including a full colour reprint.

This mad little tale didn’t feature in 2000AD for a while, although has had several reprints including a prog run, and had its first run in The Daily Star, a UK newspaper which is no better than a comic, in 1987.  It operates mostly away from the main timeline and so we’ll tag it as an alternate story.

Bride of Death is a bit of an odd effort.  The writing is funny, predicting the comedic direction that Death would eventually go down, but it isn’t amazing despite Wagner being behind it.  Also, Ian Gibson’s artwork is just as messy as his work on Bride of Death.  So while this remains a fairly funny story, it’s not grade-A Death unfortunately. 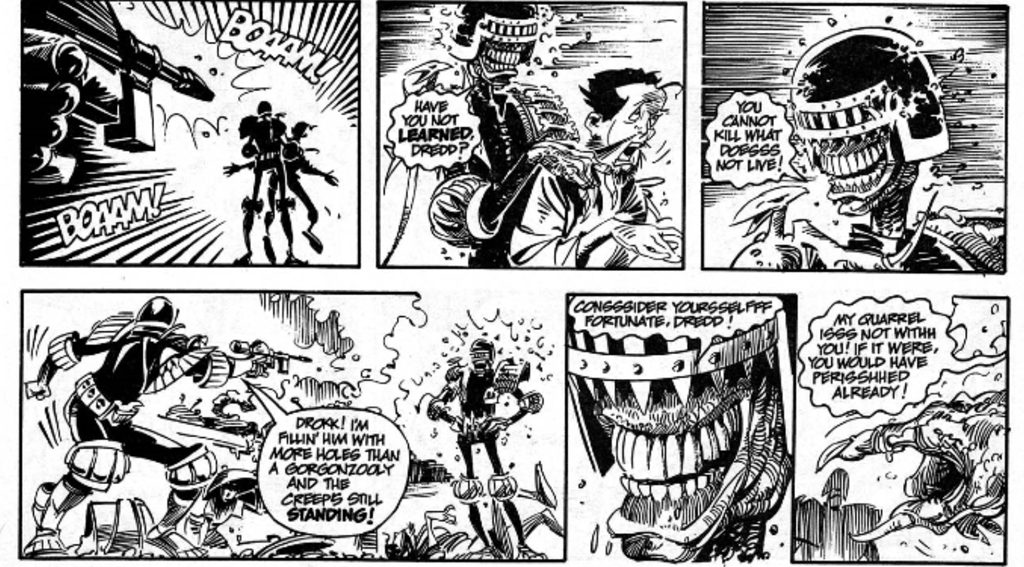 Bride of Death is an amusing but slightly watered down tale of an actress, Zonda Vaux, who is working on a film called ‘Bride of Death’ but the story cleverly starts out in the film’s plot as a woman is swept off her feet and right into a whirlwind marriage by Judge Death himself.  After Death executes her ex-boyfriend we realise that this is indeed a film set.  Zonda is playing the bride in this production and is struggling with the role.  After all, no-one wants to be kissing the spiritual entity that murdered hundreds of citizens the last time he was in town and she’s struggling with the demanding director, Julie Scrim.

Things take a turn for the more murderous when the real Judge Death shows up and murders Scrim before suddenly disappearing into thin air.  Dredd and Anderson investigate before the Psi-Judge realises that not only was Death not actually real, he’s been conjured up by the mind of Zonda Vaux as an inadvertent way for her to deal with her stress after she blacks out.  Even by Judge Death story standards this is a massive leap of faith.

Death makes one more appearance when Dredd and Anderson turn up at the studio and is in fact even scarier now as he’s made of pure psychic energy and cannot be killed.  Anderson instead delves into Vaux’s mind in an effort to wake her up.  Despite the actress not knowing she’s responsible, she gets taken to the psi-cubes for a life sentence, a particularly bleak ending to an otherwise fairly comedic tale. 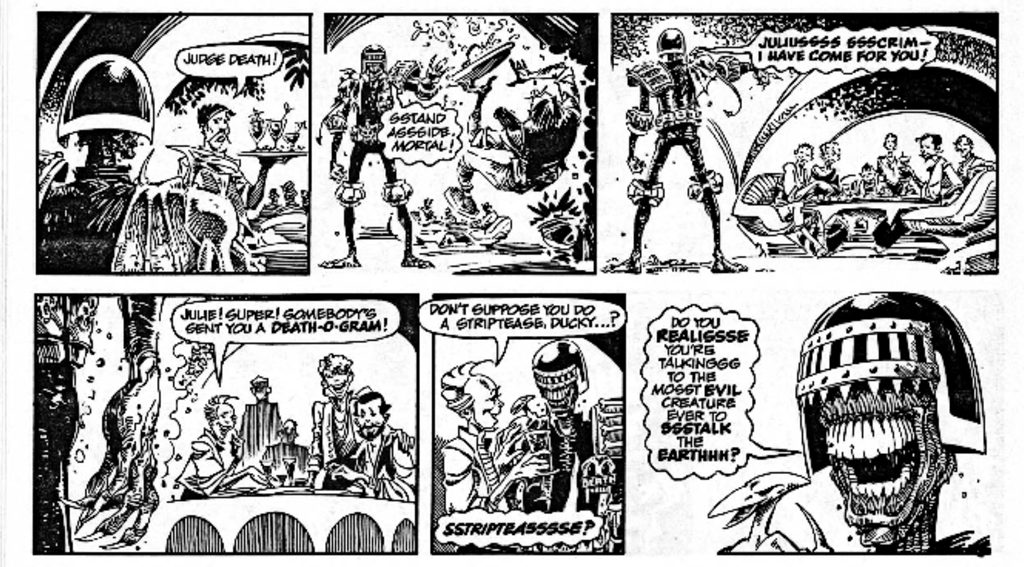 Still trapped in the void despite the weird psychic cameo here.

This one was printed in a newspaper,  and then 606 to 608.  It then got another run in Megazines 3.54 and 3.55.  That all means you’ll probably struggle to purchase this one unless you go to eBay. 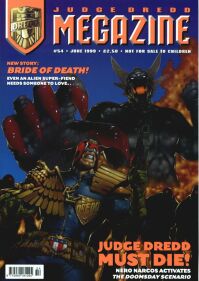