Cursed continues directly on from Winter Break.  As with that story and Tainted, this continues Kek-W’s unrelentingly bleak tale of Judge Death’s homeworld before he eradicated life on the planet.

Fans of Death and the Dark Judges are treated to some really interesting moments here with Judge Fear, whose personality Kek-W has done great things with in the past, and a glimpse into the cadet days of Sidney De’ath.  Also, the main protagonists, Judge Fairfax and Jess, continue to develop nicely too as they make their way through the cursed world that Kek-W has created.

The impressive partnership of Kek-W and David Kendall is even better here than it was on the previous two stories and so this entry in the Fall of Deadworld series is completely unmissable.

Cursed continues the Fall of Deadworld with Jess and Judge Fairfax continuing to live life on the run.  The story opens with them discovering a well-stocked service station where Jess grabs some chocolate and cigars before it is revealed to be a trap.  They fight their way out, blowing up the place in the process.  As they continue their journey though, it becomes apparent that Fairfax is starting to struggle with coming off of the drugs that all Judges are given to make them more aggressive.  Meanwhile, Sister Psiren is reaching out, trying to find him.

As they travel through the Fracklands, a desolate expanse, Fairfax collapses, trapping him and Jess underneath Byke as an alligator, hopped up on Dead Fluids, attacks.  Jess is able to shoot and kill the alligator.  As they recover, Fairfax starts to remember some of the things that happened when he was younger, things that the drugs had made him forget.

We see him as a young cadet getting beaten up by some other cadets as part of his training.  The Judge Tutor, Cain, notes that Fairfax seems all too willing to take punishment but unwilling to give it out.  A young man suggests insulting Fairfax’s father and this works.  He batters the other cadets.  The young man then tells Cain that he has failed in her duties and he executes him.  It turns out this young man is Sidney De’ath and he’ll be tutoring the young cadets from now on.

The story cuts back to Judge Death, over a video link as he was in Tainted, talking to Psiren.  She can feel that Fairfax is thinking about Judge Death.  He wants Fairfax brought in alive.  The other sisters, Phobia and Nausea, are angry because they feel that Psiren is flirting with Death.

Meanwhile, Fairfax has surrendered riding duties to Jess as he recovers from going cold turkey.  However, when they have to stop to allow him to throw up, a family of mutated humans approaches them.  Jess senses that they are good and gives them chocolate and water, stopping Fairfax from blasting them.

They continue their journey with Jess not talking to Fairfax until they reach their destination, a bunker that the Chief Judge had set up for emergencies.   They plan to ride out the crisis in there but it becomes apparent that the bunker had been raided already and they are soon ambushed by a group wearing stealth suits.  It turns out they are the members of the resistance and Jess pleads with them to not kill Fairfax, explaining that he has turned on the other judges and that he once knew Sidney De’Ath. 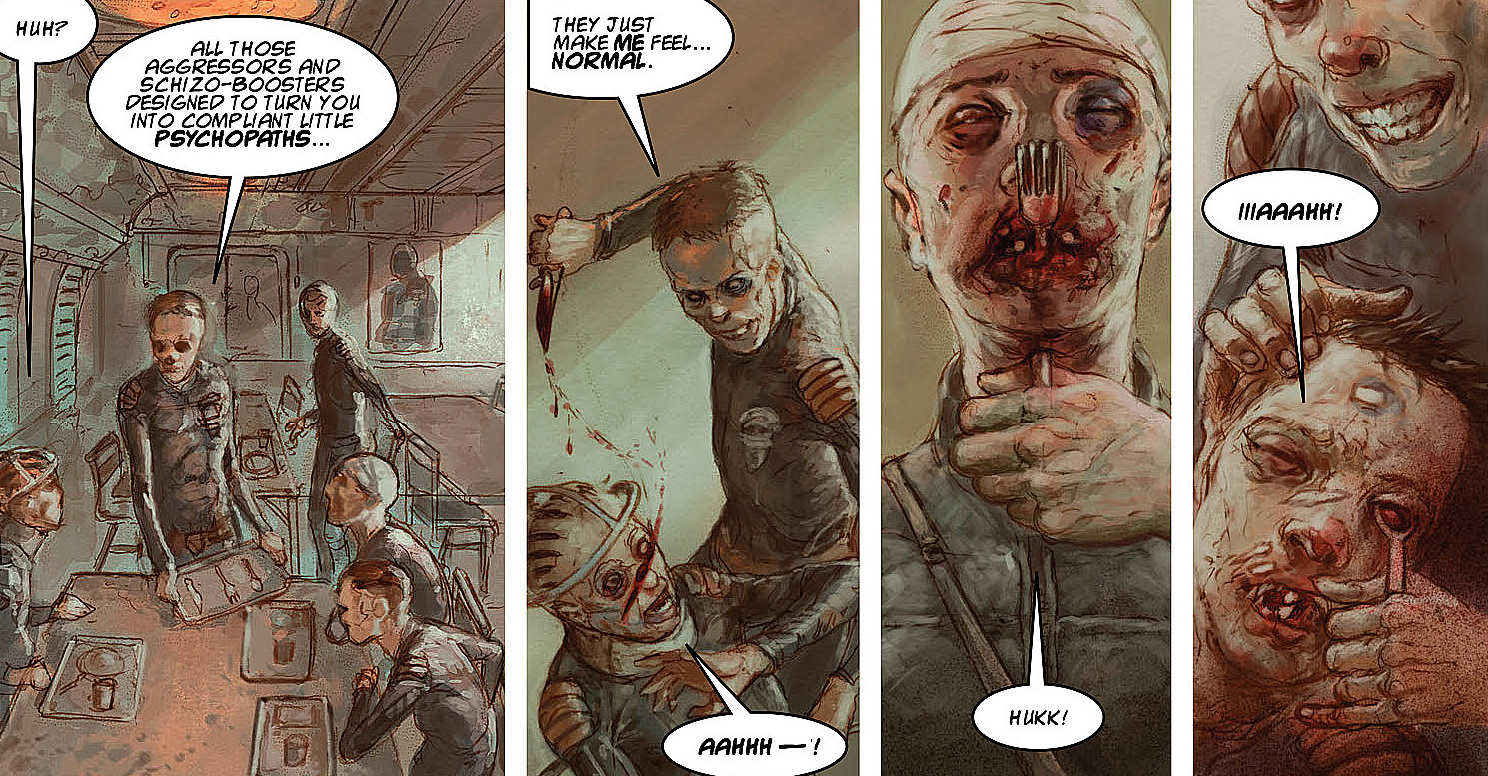 We see another flashback.  Young Sidney approaches Fairfax in the canteen.  The three boys that Fairfax previously beat are there and Sidney approaches them.  One of them mocks him for being the Judge Tutor’s House Boy and he takes out all three, very brutally, with a knife, fork and spoon.

As the resistance moves out, Psiren arrives at the town we saw in Tainted and finds Judge Gates who has somehow grown a new head.  Psiren explains that the Dead Fluids are changing everything, making such things possible.  She then takes his head, feeds it Dead Fluids and puts it on a new body.  Before continuing to track Fairfax and Jess, who she believes is the ‘Judge Child’ that may be able to stop the Dark Judges.

The resistance makes their way to ‘The Wall’ which is the base for the resistance.  One of them, Tucker, talks to Jess.  She reminds him of someone and when she says who she is it becomes apparent that Tucker knew Cassandra, her mother, and when she says that she is 13 he says ‘shit’ implying that maybe she’s his child.  He walks off telling another resistance fighter, Halliday, to keep Jess out of his way.

Later,, Jess attempts to rescue Byke who the resistance are using to reconnect to, and hack into, the JudgeCloud system.   However, she is stopped and is unable to stop them as they do it.  While in another room, Tucker speaks to Fairfax, asking him about Jess and her family before revealing that the plan is to put a bomb inside Fairfax and then let the Judges capture him.  Tucker leaves the room, leaving another resistance fighter, Proudwater, to do the procedure.

However, Proudwater instead asks Fairfax about the Sheriff they encountered back in Tainted, who is their brother, and then gives Fairfax some drugs to help him remember.   She sees what he was like as a Judge, corrupt and violent.  These are painful memories for Fairfax though and Psiren, who is nearby, picks up on his pain, savouring it.  She reveals to Gates that Fairfax was Sidney De’Ath’s first protege, before Fear, Fire and Mortis.  She also tells him that she is able to see the Sisters’ true form, see them for what they are.  She contacts Judge Fear, requesting back up before they take on the resistance.

Jess escapes, stealing Byke’s memory chip.  While outside, Fear turns up and starts injecting severed heads with Dead Fluids.  They sprout legs and start infiltrating the resistance base, causing one person to let Psiren and her team in.   Another finds, Casey, the man who was working on Byke and takes him over, making him silence the alarms.  That sequence is pretty horrifying by the way!

As the rest of story plays out, as a battle between the resistance and Psiren and Fear’s army of terror, a few interesting key points happen.  Proudwater explains to Jess that she’s there to save the world and that she needs to find a horse, which she takes to mean the mechanical horse the resistance has and that she needs to put Byke’s chip in it.  Also, Proudwater protects Jess  from Judge Gates when he arrives before Fairfax decapitates him.   She also manages to use her own psychic abilities on Psiren, reminding her of who she used to be when she was still vaguely human.  Fairfax then pokes out one of Psiren’s extra eyes (making her unable to hear, which is sort of her Dark Sister superpower).  But Psiren is able to capture Fairfax in the struggle.

Jess finds the horse but also finds Judge Fear who taps into her main source of anguish which is losing her family.  However, she is able to get Byke operational who then destroys Fear’s body.  Walt Tucker shows up but he’s off of his PTSD meds and suddenly feels the need to put on Fear’s helmet.  Jess asks him if he’s her father, to which he replies “do i look like your father?”

As Psiren, Casey, Gates’ head and Judge Fear (now in Tucker’s body) leave The Wall with Fairfax, they blow up the resistance base with Jess and Byke in it.  As they leave Fairfax protests, saying that he and Psiren had a deal which makes Gates suspicious.  Potentially laying some pipe for further stories.

Jess finds herself trapped in darkness under rubble from the explosion but is rescued by the family of mutants that she was kind to earlier in the story. 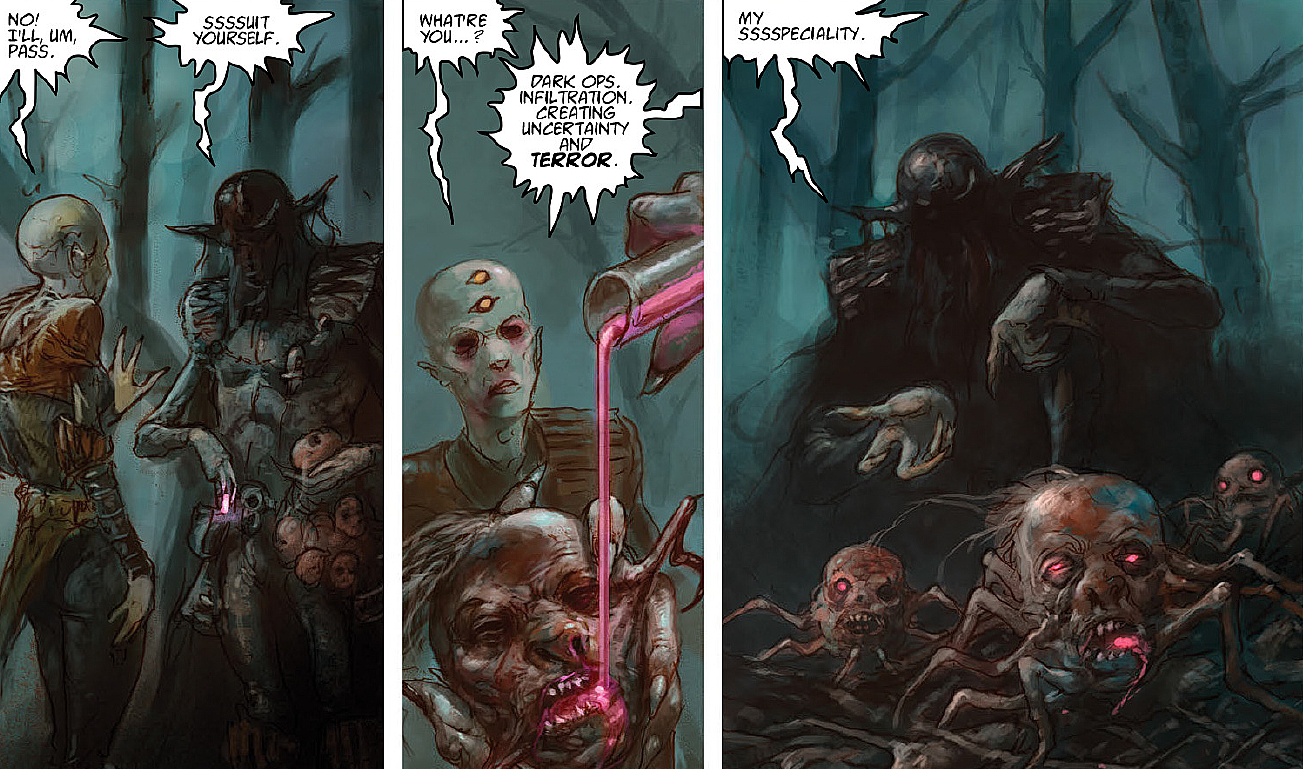 The Fall of Deadworld: Book One