Now we are getting serious.  This is the first story in 25 years where the Dark Judges are reunited and it ushered in a new era for them where everything would get darker but also where they would finally get the respect of starring in their own story, in the main timeline, for the first time since Necropolis.

This story was the payoff for fans of Death and co.  Their malevolent intentions unrestrained, the humour reduced and given a sixty-six page run.  John Wagner’s writing on Dark Justice is excellent (albeit somewhat criticised in reviews) and Greg Staples, 19 years after providing the art for Dead Reckoning, elevates the story with the best art the Judge Death timeline had seen up until that point with painted panels that took Greg two years to complete.  It’s stunning.

Dark Justice is essential reading and it sets up two of the best stories the timeline has to offer too.  Unmissable stuff.

Dark Justice opens at a space port with a spaceship, The Mayflower, ready to be boarded by four thousand of Mega-City One’s richest citizens.  They are looking to leave behind the pollution, violence and corruption of the Earth, and search the galaxy for a new home.  In luxury, of course.

Meanwhile, PJ Maybe (still calling himself Roberto Smith) finds an intruder in his mansion.  The man presses a gun to PJ’s temple and demands, in Judge Death’s hissy tone, to know where his brothers are.  In the previous story, PJ had trapped them in a bottle.

The story then cuts to Judge Dredd trying out the third iteration of his Lawgiver gun and we also see Judge Anderson tending to Judge Logan who had a brush with Judge Mortis during Day of Chaos: Eve of Destruction.  Anderson looks into Logan’s mind and sees the Dark Sisters there.  They reveal that the Dark Judges are now free and reunited. 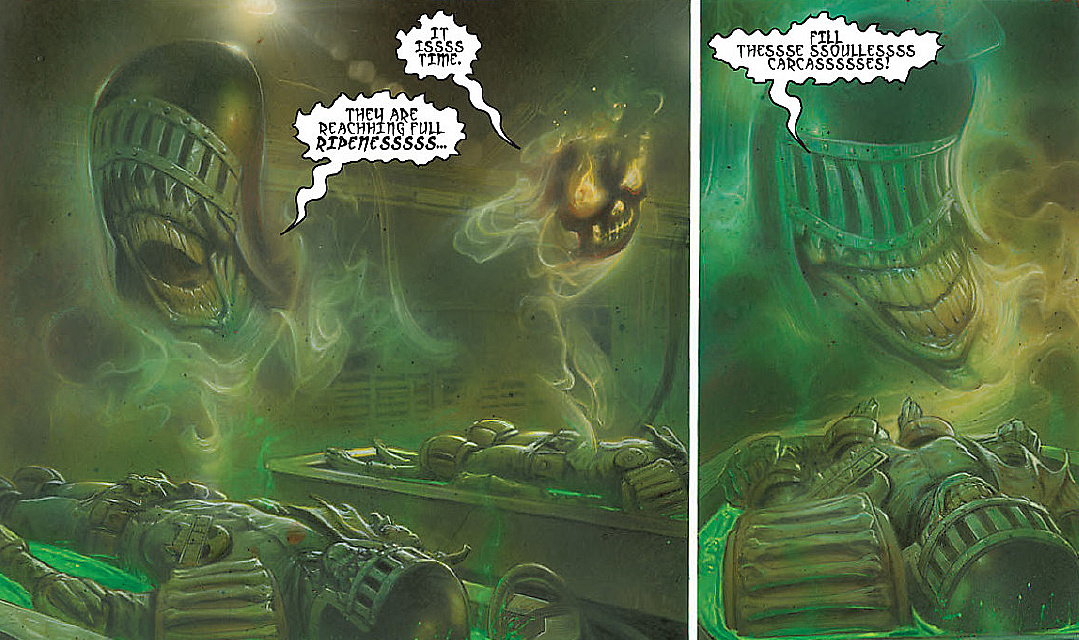 The Mayflower has now left orbit and the Captain, giving general updates about the journey on his log, notes that Science Office Cutler Davey has become withdrawn from the rest of the crew.  The story cuts to Davey in the medical quarters, looking at the voyage’s first dead body with a colleague.  He then reveals that he killed the body, again in Death’s lisp, and kills the other man.  It becomes apparent that this is a temporary body for him and that he’s looking for a more permanent body.

Anderson goes to PJ’s mansion and senses exactly what happened.  She sees how Death arrived and how PJ threw the bottle containing the spirits of Fear, Fire and Mortis at the ground.  Reuniting all four Dark Judges.  Anderson later works out that Death was using the body of Cutler Davey and realises that the Dark Judges are now on the Mayflower.

On the Mayflower, Death resurrects the other three.  They are discovered by the crew and begin slaughtering everyone.  While back in Mega-City One, Judge Logan’s condition begins to improve and so Anderson and Dredd decide to go after the Mayflower.

The slaughter continues while the rescue team led by Dredd and Anderson catch up to the Mayflower.  They board the Mayflower and their ship moves a short distance away.  Anderson can sense that they are being watched and she’s right.  Judge Death hits a red button, firing a missile at the rescue ship and destroying it, leaving Dredd and Anderson trapped on the Mayweather with no back up, no hope of a rescue.

The rescue team press on, finding survivors on their way to confront the Dark Judges.  A small boy, Mitch, excitedly runs ahead ignoring his mother’s warnings and bumps into Judge Fear who opens his mask and terrifies the poor child (apparently to death but you later see him terrified and unable to speak).  The rescue team begin firing on Judge Fear, destroying his body and they are able to trap his spirit in a suction trap.  Death sneaks up behind one of the rescue team and grabs her.  Dredd asks Death to release her and take him in her place but Death kills her immediately

Dredd battles with Death and Mortis, slowing them down with an explosive device while Anderson shoots Judge Fire with a hi-ex round slowing him down before he traps her in an agricultural dome, a bad place to be considering all the wheat growing there when you’re facing a being that shoots fire.  However, Dredd turns up and pushes Fire into some farming equipment, destroying his body.  But, Dredd’s attempt to trap Fire in a suction trap fails and he gets away.

With one trap left and three Judges on the loose, things don’t look good for them but Dredd comes up with a plan and urges the survivors to get to another agricultural dome.  There he battles Death and Mortis once more, eventually creating enough distance to get to the nearby aqua dome where he seals the door.  Mortis is unconcerned, thinking that Dredd and Anderson have trapped themselves but they haven’t and Death knows it.

Dredd had rigged some explosive barrels to explode and they do, taking out the entire dome, blowing it clean off of the Mayflower and destroying it, casting Death, Mortis and the spirit of Judge Fire into the vacuum of space.

Dark Justice was reprinted as a standalone hardcover graphic novel.  It’s out of print at the 2000 AD shop but still available at Amazon (link below). 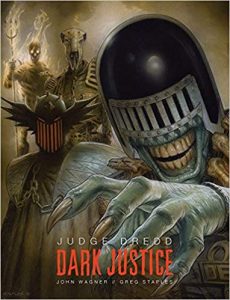