Day of Chaos is a tough one to review because it’s probably the most epic of mega-epics in 2000 AD history and barely features  the Dark Judges at all (with no appearance at all from Judge Death).  As with Necropolis, the seeds for this started early and then the story itself ran for ages.  However, unlike Necropolis, it was split into smaller stories, each one building towards the actual day (of chaos) itself.

Day of Chaos is comprised of ten stories running from Progs 1743 to 1789 but it is in Eve of Destruction, the sixth story, where the Dark Judges turn up.  And even then it takes a whopping 15 issues of that story before they do.  It’s a long overdue return for them into the main timeline, as they’ve been in captivity since 1990’s Necropolis (albeit with some appearances since in alternate/past stories).

John Wagner had writing duties for most of the Day of Chaos arc and he weaves a long, winding story that demands your attention if you’re going to get through it.  However, if you’re just here for the Dark Judges then you might find it all a bit overwhelming.  The art is great though (and oddly consistent given that the artists change half way thought) and it’s great to see Fear, Fire and Mortis back in the main timeline.  They ultimately get almost twenty pages which isn’t much in terms of the overall story but does at least bring them back.  Also, Wagner stays away from putting any comedy in the story which is fair enough as ultimately the events of Days of Chaos would cause over 350 million lives to be lost.

Note:  if you want an entire explanation of the Day of Chaos plot, this Wiki entry is pretty good.  We’ll zoom through that and will concentrate on the pages where the Dark Judges are involved.

Day of Chaos is a reaction to a previous story, Apocalypse War, where the Soviets attacked Mega-City One, killing 150 million citizens.  Dredd led the counter-attack, ultimately killing 800 million Soviets.  Thirty years later, an assassin called Nadia comes to Mega-City One for revenge after her home city was destroyed.  She’s more interested in Dredd but her comrades have a plan to unleash a disease, the Chaos Bug, on the city.  It’s not fatal but it does cause the infected to go on a kill-crazy rampage.

She wounds Dredd but is killed.  She had been working for Colonel Borisenko who has captured a bio-weapons scientist, Elmore Yurges, and is forcing him to create the Chaos Bug.   Ultimately Borisenko is captured and Yurges is killed but the virus is unleashed.

In an attempt to stop the virus from spreading, Judge Vass (a senior judge), suggests that the infected should be humanely killed and buried outside the city but is overruled by Chief Judge Francisco.  Meanwhile, to make matters worse,  more terrorists destroy the HQ of the Public Surveillance Unit, and when the citizens realise they are no longer being monitored, the chaos spreads further.  And as the Chaos Bug starts to ravage the city, a new plan is formed.   The Judges start urging people who are infected to report themselves, promising they can be cured.  Even though this is a lie.

However, Judge Haldane, who is a sleeper agent, leaks this information and Judge Vass’ previous plan.  Creating more outrage and distrust.  Then the situation goes from bad to ridiculous when Haldane releases the Dark Judges.  So, now that you’re all caught up.

The Dark Judges are trapped in small crystals that look a bit like the one that trapped Zod and co. in Superman 2.   Haldane arrives, kills the Judge with him, and takes the crystals back to his accomplice, Garf.  They have three bodies ready (dressed in Dark Judge uniforms from a costume shop) and they set about releasing Judge Mortis first.  He immediately threatens to kill them but agrees to reserve judgement when he sees the bodies they have prepared.

Haldane explains that Mega-City One is in chaos and that the Judges are too stretched thin to stop them this time.  The three Dark Judges have their spirits transferred to the waiting bodies.  Meanwhile, Judge Dredd is in the area and blasting crowds of lawbreakers with his bike cannon.

As soon as the Dark Judges are resurrected in new bodies, Judge Mortis kills Garf (best kill in a decade by the way).  They then ask Haldane about the whereabouts of Judge Death and when he explains that Death left the city, Judge Fire burns him to death.

Free at last, the Dark Judges let out a triumphant cry that alerts Judge Dredd to their presence and then they begin dispensing judgement to anyone that they see.  Dredd turns up to battle them and destroys the host bodies of Judges Fear and Mortis almost immediately.  Judge Fire urges them the retreat to him as he takes over a riot control vehicle.   He charges the vehicle at some nearby looters before Dredd throws a grenade at the vehicle, destroying Fire’s body.

In hell.  Fire, Mortis and Fear free but in spirit form.

Day of Chaos was reprinted across two books, The Fourth Faction and Endgame.  For your Dark Judge fix you’ll be needing the latter.  It also contains the next story in the timeline. 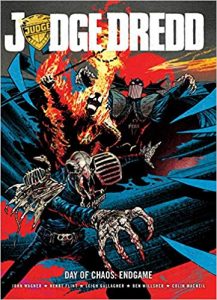