Dead Reckoning continued Judge Death’s semi-regular run of appearances in the mid-’90s in this seven prog run in 1996. Typically, for this era, it’s one of Death’s self-contained stories and does feel like John Wagner is giving him an outing rather than bringing him back for good.

Unlike some of the other stories in this era, this does some interesting stuff in regards to time travel and we do get a good look at Deadworld when it was still… er… Aliveworld.

As a mid-’90s Wagner story, Judge Death is in full wise-cracking mode but there’s enough of the horror side of things to flesh out this story and make it appeal to fans of early ’80s Judge Death.  It also brings back the Dark Judges for the first time in a while too.

Greg Staples is on art duty and does an excellent job. The visuals are detailed and colourful and really elevate Dead Reckoning to another level.

Dead Reckoning opens with two things going on.  Judge Death is visited in captivity by Doctor Davenport who wants to talk to him to try to understand how the process of becoming dead but still active actually works.  At the same time Dredd is responding to a nearby report of two gang thugs who have a rocket launcher.

It’s not a great combination and when the thugs fire off a rocket in the vague direction of some rival turf, it hits a floating chem tanker which then crashes into the facility where the Dark Judges are held.

The tanker lands squarely on the prison facility, damaging it enough to free Judge Death (but not the other Dark Judges).  He floats on out of there and acquires the body of an old woman to become his host.

He then makes his way to Davenport’s lab and coerces her into dimension jumping with him back to Deadworld.  However, when he arrives it is during the final purges with Death and the other Dark Judges ruling over the human Judges who are under orders to kill everyone.

Death, still dressed as an old lady, makes his way to the Dark Hall of Justice where he battles with Fear, Fire and Mortis before meeting Judge Death who promptly tries to do his usual punching a hole in your chest thing.  When it doesn’t work Deadworld Death is forced to believe Old Lady Death that they are the same person.

Judge Dredd meanwhile has tracked down Davenport’s lab and jumps across before making his way to the Dark Hall of Justice where he fights each of the Dark Judges before eventually destroying the host body of Old Lady Death and trapping his spirit in a trap.

Apparently, not messing with history is important to Judge Dredd because he leaves Deadworld, allowing the Dark Judges to continue their purge of planet, knowing that they’ve now seen the dimension jump technology that would ultimately allow them to come to Mega-City One.

All four Dark Judges in captivity in Mega-City One.

If you want to own Dead Reckoning, you’ll need to pick up Judge Dredd Case Files 25.  This contains a lot of non-Death stories.  If you just want this story then tracking down the Progs on eBay might be a better option or try to find the excellent Extreme Edition #1 which has a whole heap of Judge Death related content. 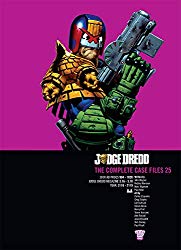