After a two year hiatus, the next Judge Death story would actually be one he doesn’t feature in but is mentioned a lot.  It’s set in Apartment 133B, Sylvia Plath Block which keen Judge Death fans will remember as his post-Necropolis address, owned by the adorable Mrs. Gunderson.

While the story features a Judge Death imposter, and Mrs. Gunderson as well, the real Judge Death doesn’t appear but the story is an interesting ripple in the post-Necropolis timeline, even if it probably isn’t essential reading, especially as it doesn’t shed any light on Judge Death’s actions.

The Wagner / Grant combination is as good as ever and Alex Ronald’s art is detailed and clear even if Gary Caldwell’s colouring is a little washed out.  Mrs. Gunderson gets a whole new look which is a little jarring as well but apart from that this is a well-written, well-presented tale.

Death Becomes Him starts with some thrill-seekers being warned about going into a room that contains a “creature of unparalleled evil” before opening the door to find Judge Death stood there.  Instead of recoiling in horror, they start taking photographs.

It turns out this is Judge Death’s old apartment, the one he rented after Necropolis, and Judge Death is in fact an actor but when Death starts attacking them, it becomes apparent that something is wrong.  Judge Death may be long gone but his aura remains and it is starting to affect Giff, the young actor playing the role of Death. 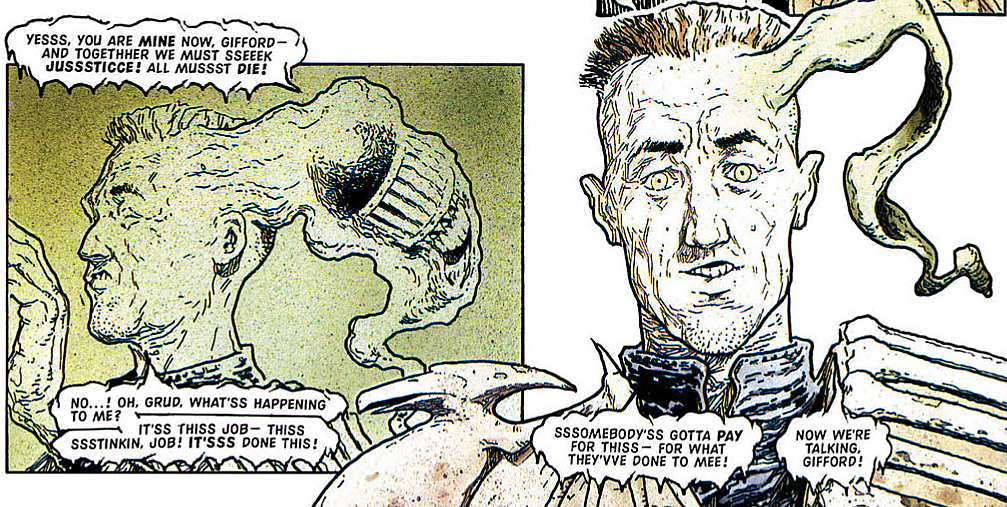 He gets it into his head that he needs to kill Mrs. Gunderson and grabs a knife but is interrupted when Judge Dredd shows up, investigating the suicide of one of her previous Judge Death actors.  It turns out that all the previous ones have either killed themselves or gone full psycho and Dredd starts to suspect that the apartment itself is holding some sort of malignant force, a remnant of Judge Death himself.

He hears about Giff and when he sees a knife on the floor, he decides to track him down.  In the meantime Mrs. Gunderson makes her way to a bar and when Giff bursts in trying to kill her, Dredd shoots him, killing him instantly and proving that this was just a regular guy.

In captivity, along with the other Dark Judges, in Mega-City One.

To own this, you can either go for the Progs on eBay or Megazine 335.  Or you can go for Judge Dredd Case Files 29 which has Judge Death on the cover but this is his only story in that compilation. 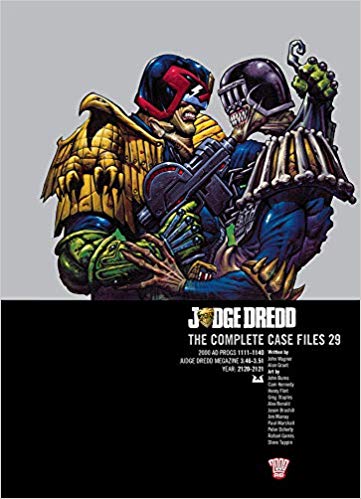