First published in progs 224-228 in 1981 in black and white.  Republished multiple times including a full colour reprint.

You can’t just create the greatest super villain of all time and give him a single 15-page run and so a year after Dredd and Anderson left Judge Death encased in Boing at the end of Judge Death, John Wagner and Brian Bolland returned with Death Lives.   This story is most notable for introducing readers to Judges Fire, Fear and Mortis, Death’s Dark Judges.

Following up from a straight classic like Judge Death, is no small task and so Wagner and Bolland had their work cut out for them.  So what they did is take the original idea and expand it.  Introducing the Dark Judges was a masterstroke.  Three new characters each with their own abilities, or rather preferred ways of killing people, and all of them with a very different look to Death.

Back then, my favourite was Mortis who would make his victims decompose just by touching them.  His weird sheep skull didn’t make much sense but he was cool all the same.  Fear’s death gaze was interesting too, leading to much speculation as to what could be happening behind his mask.  Fire was a bit more self-explanatory.  He was made of fire and he liked the idea of sharing that trait with his unwilling victims.

As with the original Judge Death story, Death Lives features great, snappy storytelling and Bolland’s art is as good as ever.  A truly worthy sequel that feels upped the ante and even now, almost 40 years later, you’re still left wondering how this comic was ever sold to kids. 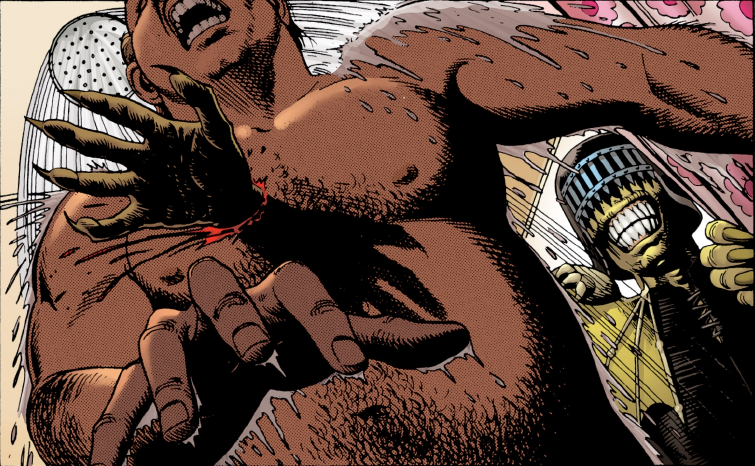 With Judge Death on ice (well, in Boing), this story opens with a man, named Mitson, visiting Judge Anderson in the Hall of Heroes as part of a visiting tour.  However, when the tour moves on Mitson stays behind and cuts into the display using a laser.  It turns out that he was being coerced by Death’s cohorts Fire, Fear and Mortis who promised not to kill his wife if he freed Judge Death.

Of course, they renege on their part of that deal and use Mitson’s body as a host for the now-freed Judge Death before continuing his never-ending quest to judge the living.  Luckily for them they are in a heavily-populated housing block and have plenty of neighbours around to judge.  They also have a psi-force field generator keeping Dredd and the other judges out.

As the carnage continues, Anderson figures out a way to get her and Dredd in and they work their way to the generator in order to take it out and allow their fellow judges in.  They successfully manage that and kill Judge Fear (in that most iconic of meetings).   With Fear disembodied and the cavalry blasting their way through the front door, the Dark Judges dimension warp out of there back home to Deadworld.

Dredd, displaying some Mega-block sized balls, decides that the best plan is to follow and take them on on their own turf.  They arrive to find the Dark Judges’ homeworld, completely devoid of life.  As the Dark Judges defend their home, Anderson is able to channel the considerable misery of the former inhabitants of Deadworld and uses that considerable psychic power to turn Death and his comrades into dust.

Powdered, presumed dead, outside the Deadworld Halls of Justice.

Your best bet is Judge Dredd: The Dark Judges which includes this story as well as Judge Death and The Four Dark Judges.  The original two stories were black and white but are colourised in this edition and do look better for it, although purists might disagree. 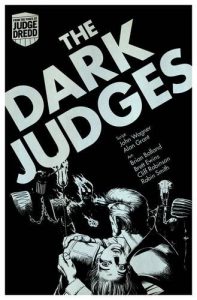