Deliverance follows on from 2019’s The Torture Garden as the latest entry in the Judge Death lineal timeline (as of the time of writing, June 2021) and continues the ‘Judge Death in space’ story arc.  To recap, this storyline started after the post-Necropolis story Wot I Did During the Worst Dissaster (sic) in Mega-City History where Death was free but Fire, Mortis and Fear had been captured by PJ Maybe.   As a character, Death had gone through that whole comedy period but Dominion was about to show us the darkest incarnation of the Dark Judges (well, at least until Kek-W took it even further with his Deadworld stories).

Where Dominion was Death and crew on a space ship, Dominion was them ravaging an off-world colony (essentially making these two stories the Alien and Aliens of the series).  Then came The Torture Garden which was a pretty harrowing tale that showed Death and the Dark Judges tormenting the remaining colonists for their own amusement.  It was a tremendously dark story and one that ended very satisfactorily with  Death being trapped by the librarian Pousay as Rosco escapes on a rescue ship.

Anyway, Hine (who took over from John Wagner after Dominion) and Percival have now teamed up to continue the story.  The Torture Garden may well be one of our favourite ever Dark Judges tales and so this was one that we were very excited about.

With Judge Death encased in Boing and forced to read an uplifting poem forever and the other Dark Judges lost in space in their spirit form (as well as Judge Whisper now heavily compromised after being shot multiple times), things are looking up for Rosco who ended up on the SS Kimodo.  She enters hypersleep, expecting to wake up back home.

Meanwhile, the Navis Mortis (the ship of Death) is headed to Thanatopia with its crew, the Mortarian Death Cult, who have left Earth in search of death and penance.  They torture themselves constantly, knowing that any pleasure will condemn them to an eternity in hell.   They’ve also got children with them who have been indoctrinated into believing in these values, so basically the whole ship is a problem and it seems to be being orchestrated by the Sisters of Death.   And that’s when they run into a wormhole which takes them directly to Judge Death who they bring on board.

Meanwhile on Thanatopia, Mother Kalula, the High Priestess of the Mortarians is watching as the Navis Mortis arrives.  However, the Mortarians on the planet are unable to free Judge Death from the Boing, believing that Judge Death doesn’t wish to be freed.  However, he is able to communicate with the Sisters who tell him that Judge Whisper is on his way, having found refuge on the Kimodo.

The Sisters then visit Whisper and instruct him to wake up Private Kovacs and make him fly the ship to Thanatopia.  And this is where it gets weird.  Whisper is instructed to then kill the crew, starting with Rosco.  However, his damaged nervous system is being taken over by flowers and so he’s unwilling to kill her right away.  Meanwhile, Kovacs is able to resist the brainwashing and wake up the crew, alerting them to the danger.

Whisper gets the better of the confrontation though and manages to wipe out the crew before finding Rosco again.  She asks him to kill her but he’s tired of taking orders and decides that she’ll stay alive until they reach their destination.  However, on arrival she leaves on an escape pod and is spotted by a group of survivors.

Kalala and her subordinates meet Whisper who gives them his anti-Boing solution.  They release Judge Death who is full of pent up rage over being forced to read nice poetry and immediately kills a couple of Kalula’s henchmen.  Violently.  However, Whisper convinces him to stop the slaughter, explaining that the Mortarians worship Judge Death and have a ceremony planned for their judgement.  This surprises him, however Kalula also explains that some of the younger inhabitants of the planet don’t welcome death quite as much as she does.

This takes us nicely over to Rosco as she meets some of these younger folks.  They don’t want to die and she explains that she could shoot them all right there but would rather they just give her something to drink.  And then a giant bald, three-eyed, legless blob called Um shows up.  This story is… strange.  Anyway, Um explains that Rosco isn’t a Mortarian and that they need to keep her alive and so they take her to Wild Town, their own settlement where they grow food and try to survive the madness.

Judge Death speaks to his sisters who are actively searching for the remaining Dark Judges but it’s a difficult search.  He then meets with Kalula who is eager to begin the slaughter.   However, Death postpones things, wishing instead for the Dark Judges to be his new team of executions but they are a few days away.   This gives him time to send Whisper off into the wilderness on a mission to gather up the youngsters and compel them to return for the ceremony.

Rosco meets up with Um who is able to see the future and has murals painted in his cave of Death, Kalula and Whisper.   Rosco comes to learn that Deliverance, the ceremony is due to start.  Meanwhile, Whisper catches up with the kids but because they have no guilt or shame, he is unable to control them.

The Sisters return to Kalula and Judge Death explains that he needs three new host bodies.  Kalula tells him that she will have no problems finding volunteers and ends up with three unusual picks.  However you can tell who is going to be who.  The skinny guy with seven eyes has Fear written all over him, the weird big guy with claws and the odd head is clearly going to be Mortis and a weird animalistic one with long hair already looks like Fire and before long the transformation is completed.  The Dark Judges waste no time in dispensing justice however, Kalula is concerned that they’ll kill everyone before the ceremony starts.  Judge Death agrees to wait, especially when word gets back that Whisper has failed.

As the kids go on a suicide mission to rescue their parents, Rosco runs off but is convinced by Whisper to stay and fight, reminding her of her promise to Pousay that she’d live a worthwhile life.  Whisper then meets Um who teaches him the ‘whisper chant,’ explaining that it will bring peace.  Um also says to take no weapons to the final battle.

The kids agree and arrive at the ceremony.  Death is happy to see Rosco again, eager to punish her for her past transgressions against him but Whisper tells Death that he had brought a new law to the ceremony.  “There is no crime!  Reward is life!” he explains.   And as the killing is about to begin, Whisper does his chant, freeing the mind of the cultist nearest to him.   However, Judge Death isn’t so easily swayed and orders his Dark Judges to begin killing everyone.

The ninth instalment is an odd one.  This part (from Meg 432) tells the story of a girl, Zee, who creates a suicide meme that goes viral and inadvertently helps to create the Mortarian cult.  This gives a little bit of backstory to Kalula who becomes the cult leader, the figurehead for the suicide meme.  She kills Zee and is responsible for another 17 million deaths.

When we cut back to Thanatopia, the kids are getting their arses handed to them by the Dark Judges but Whisper realises that Kalula is the key.  She’s unreadable.  A void.  But he knows that he has to get to her.  However, when he does, he removes the costume covering her, revealing her to be a robot.  Man, Zee is a dick.  Anyway, the cultists suddenly realise that they’ve been had and suddenly decide that they don’t want to die.

Not that this matters to Death who merely remarks that they were all morons for believing in the cult.  He and the Dark Judges are happy to continue the slaughter but then Um arrives and Whisper realises that Um can amplify his chant.  He does this and convinces the Dark Judges that they are enemies,.

The story ends with them battling to a death that will never come, trapped in a loop as they attempt to kill each other for as long as Um and Whisper tell them to.  And with Um able to survive on nothing but air and moisture, and Whisper unable to die, that’s going to be a very long time.

All four Dark Judges are intact but doomed to fight each other for the foreseeable future. 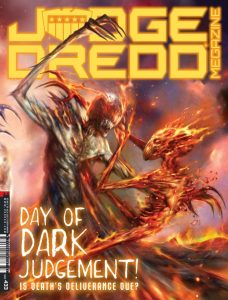