Continuing on from 2015’s Dark Justice, Dominion continued the whole ‘Dark Judges in space’ storyline.  In this, the main timeline, we last saw Death, Mortis and Fear ejected into space after Dredd and Anderson destroyed part of the Mayflower, a space ship that was carrying 4000 super-rich colonists.  Fear was trapped by them (yes… in a suction trap).

Dark Justice was a dark tale, eschewing the usual humour that had defined Judge Death since the early ’90s and Dominion continued that trend with an unrelentingly dark story that had much in common with films such as Alien/Aliens and 28 Days Later.

If you’re looking for actual criticism, the main knock against Dominion is that it feels like more of the same after Dark Justice but that’s okay because Dark Justice was excellent and introduced a new, harder-edged Judge Death and Dominion continues with that.  The ending is a little thin also but that’s okay because the story would pick up again two years later in The Torture Garden.

John Wagner’s no nonsense approach here works wonders, this is essential Judge Death storytelling and having the Dark Judges (albeit minus Fear) there makes it even better.

That said, it is the art by Judge Death newcomer Nick Percival which is truly a thing of wonder.  The Dark Judges look less human than ever and genuinely scary and Nick’s visualisation of the Dominion colony and its rapid descent into a Deadworld-esque nightmare world is equal parts unsettling and beautiful.

Dominion opens with a cargo ship, the very Sulaco-esque Solips, floating through space.  The crew have to investigate when a body appears to get stuck on their communications array.  One of them goes out to investigate and finds out that it is Judge Death who kills them and then enters the airlock.

The ship lands some time later and Commander Bundy and a lady called Riggins step out, claiming there has been a virus outbreak.  However, he’s lisping and Riggins is wearing sunglasses which seem to be hiding a glow.  So it’s pretty clear that Death and Fire have possessed them.

They meet the colony’s Governor and Chief Wayans and immediately possess them before gunning down their previous hosts.  They now have the authority to lead the colony and when Rosco, a young Police Officer, discovers the bodies, Chief Wayans says that he had to gun them down due to a virus.  She’s suspicious though, probably because of his new lisp, and her fears are confirmed when she discovers a dormant host body for Judge Death and she narrowly escapes from Judge Mortis.  It is when she tries to tell Wayans about this that she realises what is going on and she runs but is shot escaping. 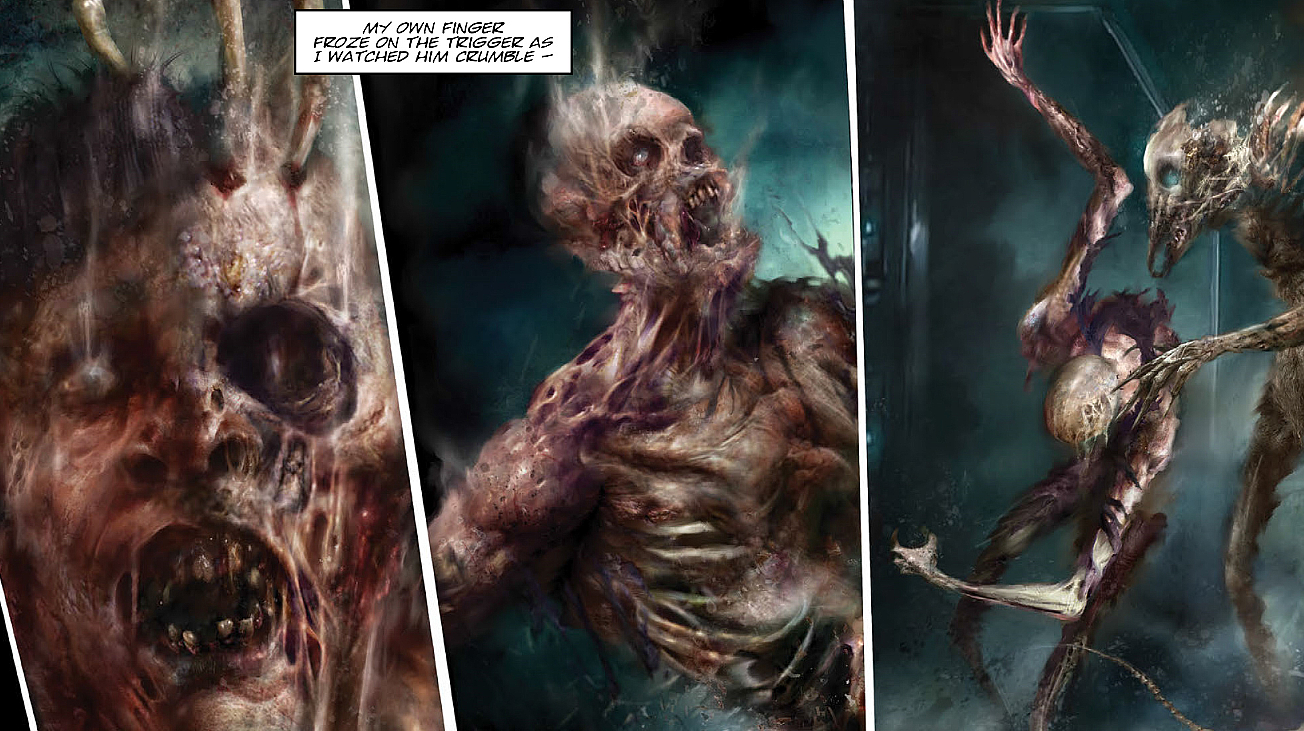 However, she wakes up eight days later in a Speedheal machine.  She exits the med-bay and discovers that almost everyone is dead.  Following the sounds of gunfire, she finds some remaining humans battling for survival.  The Dark Judges are now all fully restored (minus Judge Fear who was previously trapped by Anderson and Dredd) and have laid waste to Dominion.  As well as killing most of the colonists, they’ve also turned many of them into mindless zombies who hunt the living for them.

The survivors battle their way to the Summerdome, a meteor-proof structure that keeps the Dark Judges, and their undead army, out for a good while.  Eventually though they trick an old woman into opening the doors and at that point the battle is lost.  The Dark Judges kill everyone or so they think.

Rosco hides amongst the dead, hidden from view, and eventually finds a place to hold out.  It’s an agri-dome and so she’s pretty much sufficient for food.  It is there that she writes her account of the events that had occurred as she waits for the rescue ship that should come looking for Solips.  However, she does have to make occasional supply runs and Dominion ends with Judge Death finding her footprints and smiling.

Loose in the colony of Dominion with Mortis and Fire.  Judge Fear trapped by Dredd and Anderson.

The best way to experience this story is to pick up the hardcover reprint from either 2000AD  or Amazon (link below). 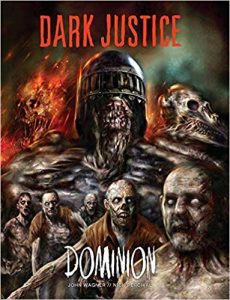