This one is easily missed.  The Wikipedia and the Judge Death BARNEY page both managed that and we did on our first run-through the timeline.  A complicating factor is that Engram pt.1 has no appearance or even mention of Judge Death.  But anyway, he shows up in this story, albeit dreamed up in visions.

Despite Death being in jovial form, as was often the way back in the ’90s, this is a very dark tale and is quite challenging work by Alan Grant.  David Roach’s intricate black and white art is superb and really supports the bleakness of the story.  There might not be enough of Judge Death here to make it one for the fans but overall this is a good story and worth checking out. 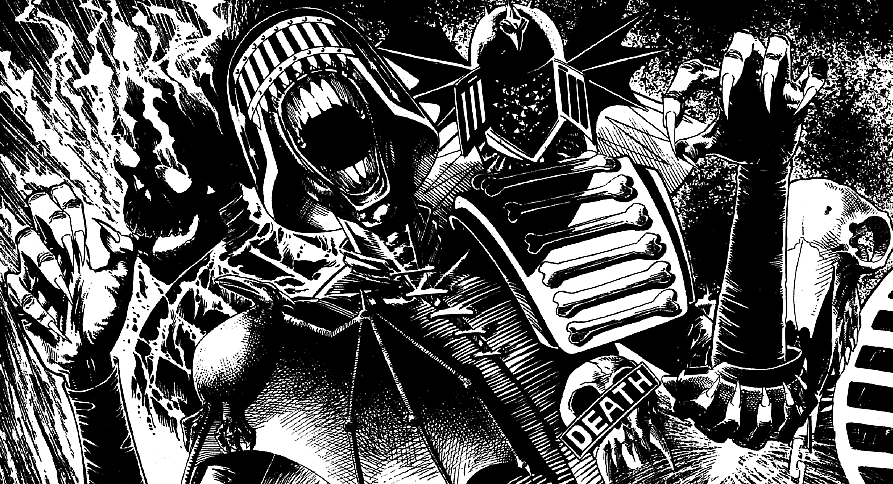 Engram pt.2 opens with a one page recap of Engrams and explains that Judge Anderson is suffering from traumatic hallucinations after witnessing a ceremony out in the Cursed Earth, leading to her being cubed.

Once we get into the main story, we see Anderson’s doctors discussing her case.  She’s at the limit of her medication, anymore and she risks losing her mind once and for all.  The scene cuts across to her in her cube and we see her having visions of the Dark Judges.  She’s terrified but she’s still a fighter and she realises that the only way to beat her own mind is to delve into it which she does.

There she sees a stagecoach pulled by skeletal horses.  The rider is Judge Death who is on his most polite behaviour.   Anderson isn’t buying it and attacks him right away but he explains that it’s her mind and that she is the one who summoned him.  They talk in a graveyard by the grave of a three year old Anderson before leaving to go to the Hall of Judges.  She’s worried that all the time Death has spent in her mind allowed him to leave traps for her but she believes this is a deeper trauma and not one of his making.

Death’s involvement ends there.  He leaves Anderson at the hall and from this point out that we realise that as a child she was abused by her father but killed him using her psychic powers.  The Psi Division took her in and buried these memories deep but not deep enough and so all of this trauma was resulting from that.  However, she is able to rationalise all of this in her own head and recovers.

The story ends with her visiting the scene of the ceremony from Engram pt.1 and here she sees the child that was part of the ceremony.  It’s only a toddler but is an incredibly powerful psychic presence with the potential to be way more powerful than Anderson.  She tells the child’s family to leave and flee further into the Cursed Earth, away from the Psi Division.

This story is one of many available in Psi Files Volume 1.  This volume also includes Four Dark Judges AKA Revenge. 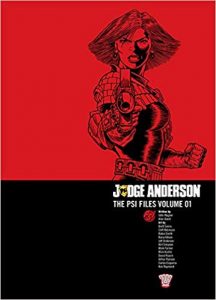