Skip to content
History
First published in Megazine 3.73 in 2001.
Writer: John Wagner
Artist: Patrick Goddard
Occasionally, 2000 AD will go a little off-script and meta, and Ghost in the Machine is definitely one of those stories.  It starts out being quite normal and ends up breaking the fourth wall.  Judge Death makes a cameo appearance here, nothing that impacts the main timeline though.
It’s a weird little story but is quite enjoyable.  You can always rely on John Wagner.  Patrick Goddard’s art is great here, very clear and subtle, but special mention must go to Chris Blythe’s tasteful colour work too.
This isn’t essential Judge Death reading by any means but it’s a good enough story, even if Death’s part in it is very fleeting indeed.
*spoilers ahead*

Plot Overview
Ghost in the Machine opens with Judge Dredd out on patrol.  He takes on two criminals who are tormenting some weird shadowy spider figure and then he moves on, drawn towards the Franz Kafka Block for reasons that he doesn’t understand.
When he arrives he seems a man at a computer.  Drawn to him, Dredd uses a grappling device to swing to and smash through the man’s window.  Once there the man introduces himself as Judge Dredd’s writer and tells him that he’s controlling his every move.  Dredd is sceptical but the writer shows him a script that ends with Judge Death showing up. 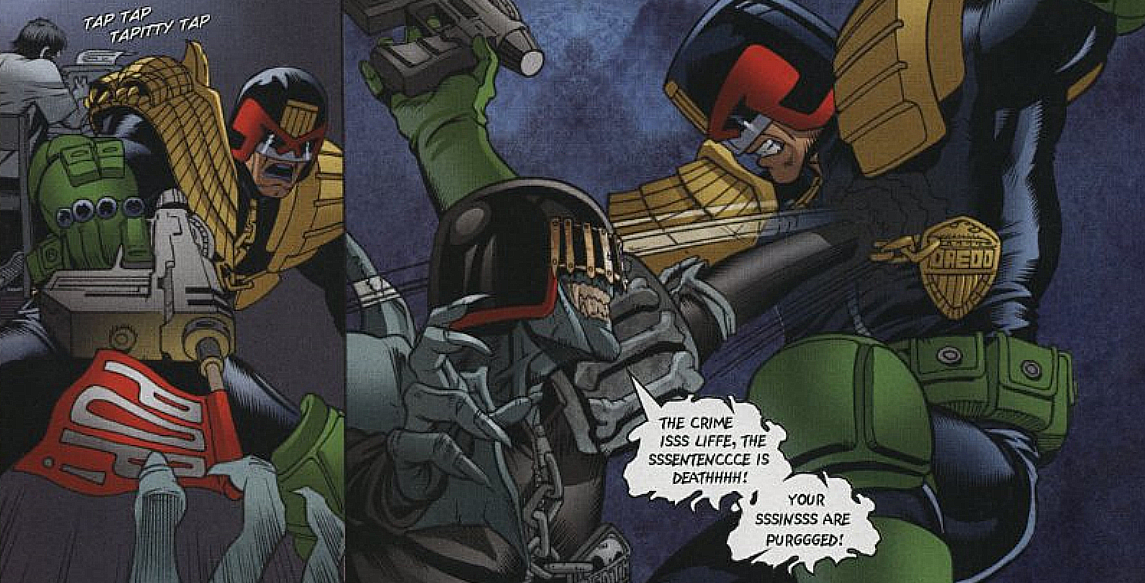 We then get a short struggle between Dredd and Death before the writer further demonstrates his power over Dredd by making him explode.  Dredd orders his torso to crawl back to his disembodied head.
Elsewhere, we see that Dredd is in a malfunctioning sleep machine.  The engineers looking over him in his malfunctioning machine can’t release him or else Dredd may be trapped in that world.  Instead they get a message to him, telling him where he is and that he needs to wake up.
Dredd gets the message and turns against the writer, smashing his head on the desk before waking up.  After realising where he is, Dredd yells out “I am not a cartoon character” however we then see that last panel but shown in a comic book with as a reader is enjoying the story, showing that Dredd in fact is a comic character.

You’ve got three options.  Track down the progs, pick up the Henry Flint Collection or Case Files 32 (which has the most stories and includes Turned Out Quite Nice Again too). 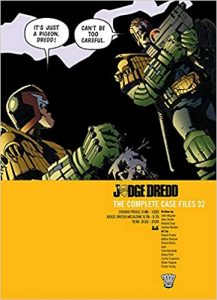