There are a lot of these stories where Judge Death turns up either in visions or memories and most of the time these are fairly fleeting appearances that we would think twice about putting in this Bibliography (except that we are basically OCD about this project now).

Goodnight Kiss is a bit like that in so far as that, yes, Judge Death’s appearance is fairly minor (he shows up in just three of the story’s 54 pages) and he does this as a part of what appears to be a delusional fever dream on account of Dredd drinking the blood of vultures.

But it is a notable story for a few reasons. It’s a Garth Ennis joint and he never disappoints. So while this is very much a Dredd story with Death only appearing in a supporting role, it’s still a very good read.

More importantly, for Judge Death aficionados at least, is that this appears to be Nick Percival’s first stab at drawing a Judge Death story. You’ll know him best for his sterling work with the recent Dark Justice, Dominion and Torture Garden trilogy. He’s absolutely exceptional now so it is interesting to see how his style has developed since this story landed some 25 years ago!

It’s interesting to see that in times of difficulty, it tends to be Judge Death who the Judges manifest in their imagination. Anderson did it in Engrams pt.2.

Anyway, it’s a great story with very good art (although we are absolutely spoiled by Nick’s outrageously good recent work) and so this is definitely one to track down and read.

Goodnight Kiss opens up in the Cursed Earth with two men, Jonni Kiss and his partner, Rosko, seeking out a very dangerous group known as the Brotherhood of Marshals. They are a secret society that patrol the part of the Cursed Earth that they see as their territory.

Kiss and Rosko find the Brotherhood and are ordered to leave by Gideon, the leader of the Southern Marshals, but Kiss explains that he’s there to talk about their fallen brothers in the North who were poisoned to death by the Judges of Mega-City One. The survivor entered the city to get revenge but was killed by Judge Dredd himself.

Kiss explains that he wants to help them hunt Dredd and he produces a number of Judge name-badges to show his credentials as a ‘Judge Killer’ and so the leader of the Brotherhood allows them to tag along.

Meanwhile, back at the Halls of Justice, the shift supervisor and an assistant notice that the file relating to Judge Dredd’s current assignment, a patrol of the Cursed Earth, has been hacked. A bounty is out on Dredd and a hitman has taken the job and now knows where Dredd will be and when. This hitman of course being Jonni Kiss.

Dredd is out on patrol with Judge Hoolihan when they are attacked by the Brotherhood.   Outnumbered and outgunned, Dredd sends Hoolihan off to escape while he turns back and faces the threat head on.  However, he slowed down by Kiss who wounds him from distance with a bullet to the body.  Dredd is captured by Gideon and they begin to fight.  Despite Gideon’s considerable size advantage, Dredd puts a beating on him but is again compromised by Kiss who shoots him once more.

Gideon orders that Dredd is staked to a cross.  Meanwhile, Rosko reveals that he put a bullet in the chest of Judge Hoolihan who is bleeding out.  We then see Dredd staked up as punishment for his part in the downfall of the other members of the Brotherhood while Gideon explains that he, and the rest of the Brotherhood, are going to Mega-City One to take their revenge on the rest of the Judges.  They leave and Kiss approaches Judge Dredd, explaining that he’d rather kill him but this sort of crucifixion is a big deal to the Brotherhood.

His Judge-killing ritual then involves kissing his victim which is a mistake as Dredd headbutts him.  Kiss then retaliates by shooting him in the side (as a kind of ‘thorn in your side’ gesture).

Dredd remains there for seven days.  He stays alive by catching vultures in his mouth and drinking their blood.  However, those seven long days start to play on his mind and he begins hallucinating.  He first sees Kraken, his clone who met his end during Necropolis, and then other people that he knew and killed.  They talk about how he has no friends left and how each of them was shot through the heart.  This is where Judge Death comes in.  He comments that Dredd shoots them through the heart because he doesn’t have one of his own.

Judge Death then brings in more of his victims, commenting that he’s impressed at how many Dredd has killed, particularly the two billion that died as part of the attack on the Sovs.  Twice as much as died on Deadworld.  Dredd counters that this was war.   Dredd then sees the scarred version of him that walked the Cursed Earth as Necropolis was beginning but this version of him tells him that he never quits, that pain means nothing to him and, determined as ever, Dredd escapes.

Elsewhere, Jonni Kiss reports back to his client, Mr Pamona, via the phone.  Pomona was the one who hired him to kill Dredd and Kiss, thinking Dredd is dead, wants his money.  However, Pomona cannot pay and so Kiss sets off the remote explosive that he put in his office (for such an occasion).

Dredd finds Hoolihan and her bike.  She’s dead and so Dredd repurposes her weapon, cremates her body and rides off.  He catches up with Rosko and demands to know where Jonni Kiss is.  He gets the information out of him and eventually gets to Jonni Kiss who is at the Brotherhood’s camp.   Dredd tears through the camp with a vengeance before killing Gideon and giving the Brotherhood one chance to give up or join their leader in death.  They wisely decide to stand down.

Dredd then turns his attention to Jonni Kiss.  Kiss is thirty years younger than Dredd, well-trained and hasn’t be nailed to a stake in the ground for a week but even so, this still isn’t a fair fight and Dredd beats him into submission before finishing the job with a bullet.  He then tells the remaining Brotherhood that their job now is to walk the Cursed Earth, telling anyone they meet that there is only one law for the Cursed Earth:  Judge Dredd.

This one got a dedicated reprint.  It’s been reprinted elsewhere but this is cheap and it has Judge Death on the cover, so it’s probably the best version for Judge Death fans. 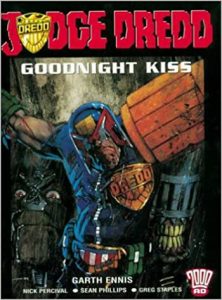