To celebrate Free Comic Book Day, 2000 AD published a 32-page special which had a couple of appearances from Judge Death in it.  The Death story from Dreams of Deadworld got a repeat after it’s initial 2015 debut but, more interestingly, a new Judge Anderson one-off, Hag Team, was also included.

While Judge Death only turns up in this one as part of a poison-induced hallucination, it’s a fun little five page story that further illustrates the influence Death has on Anderson’s mind.  This one is a tad trickier to find these days though, so you’ll have to judge (arf!) if a not-quite-real Judge Death is worthy of seeking out.

Hag Team opens with the set up that an alien bounty hunter, Trapper Hag, has broken out of Iso, aided by his sister, Skinner Hag.  As the Judges have apparently taken steps to stop them easily teleporting off-world, Skinner is having to charge up a more powerful teleporter.  Anderson however has used her pre-cog abilities to catch them in the act and she uses stun rounds to incapacitate Skinner.

This causes Trapper to attack in a fit of rage and he uses his considerable strength to get Anderson to the ground before jabbing her full of poison with a syringe.  He explains that the poison causes the victim to have nightmarish visions of whatever they fear the most.

Enter:  Judge Death, or at least a vision of him.  Trapper Hag explains that the poison usually causes fatal heart attacks, something that is very on-brand for Judge Death and Anderson appears to be losing the battle much to the amusement of Trapper and Skinner.

However, it is their laughter that Anderson is able to lock onto, allowing her to free herself of the illusion and get back to the arrest.  We’re not sure if there’s a He-Man/Inspector Gadget style moral lesson to be taken there but it’s a fun story and one that we would have missed if it wasn’t for Funt Solo’s excellent site.

This special sold out pretty quickly and nowhere seems to sell it.  So it’s off to eBay for this one. 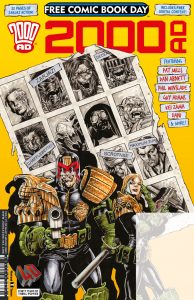