Running in some of the same Megazines as The Wilderness Days, Half-Life is a Judge Anderson story that is set in Deadworld before the Dark Judges eradicated life there.  It’s a really interesting story that gives us more back story on Sidney De’ath and the Sisters of Death.  The story is notable too for Alan Grant working with a different writer, Tony Luke, rather than John Wagner.

We’re classifying this as a ‘Deadworld’ story as it’s really set in the past, mostly in dreams. That’s a new category for the site but will be one that’s important moving forward.  We did consider calling it a ‘main timeline’ story as it does update us on Judge Anderson’s condition within the world and how that affects Judge Death.

During this story he was out in the Cursed Earth searching for nukes (in The Wilderness Days), free from Judge Anderson’s psychic abilities after neutralising her in My Name is Death.

Half-Life opens with a girl waking up from a nightmare,  Her name is Sandra and she’s been prone to bad dreams all of her life.   It’s her first day at her new school and on the way there she stands up to some boys who are bullying another boy.

He’s not particularly thankful but later, at a dental appointment, she meets him again.  It’s young Sidney, the boy who would grow up to be Judge Death.  Against the guidance of his father, Sidney doesn’t torture Sandra and just polishes her teeth.

Later Sandra sees him at a rock concert and witnesses him electrocuting the boys who were bullying him.  Sandra almost recognises him, as if she knows who Judge Death is.

The years pass and Sandra all but forgets about Sidney until she sees him on a TV talk show.  The host is playfully mocking him about the new heavy-handed approach the Judges and Sidney, now known as Judge Death, shoots and kills him.

Suddenly, Sandra has a realisation.  She remembers fighting him on a Mega-City rooftop.  She remembers that she’s Judge Anderson but trapped in the mind of a nineteen year old girl.  While over in present-day Mega-City One, Anderson is in a coma following her last altercation with Judge Death.

Sandra attempts to tell her family about Judge Death and what he’ll do to his home planet but they think that’s just her dreams affecting her.  They call the law (for some reason) and a Judge shows up, arresting them when she disappears out of the window.

She escapes into the city, looking for the resistance, thinking that maybe she can prevent Judge Death from fulfilling his destiny.  Unfortunately she runs into the two women who would become Phobia and Nausea after saving something from some wild dogs.  They are conducting experiments and have with them a tall human-shaped thing that looks like a mix between a dog and an insect.  That’s the titular Half-Life.  They’ve been giving him poisons, turning him into some sort of bio-weapon.

They drug Sandra and begin experimenting on her too.  At which point Sidney (still a human Judge) turns up, he recognises her but leaves.

Later that day, Half Life rescues her, getting her out of the place the Sisters are living in but he’s too scared to leave them and goes back.

Eventually she is found by the resistance who recognise her after an arrest warrant has been issued for her.   They take her to their base and she tells them the fate that awaits them.

They explain to her how children who don’t stop dreaming are locked up and she realises they are Psi Judges and starts planning their rescue.

The resistance infiltrates the holding facility where the Psi-kids are but a group of judges ambushes them, as if they’ve been tipped off.  The Judges start killing everyone:  adults or children, it doesn’t matter. 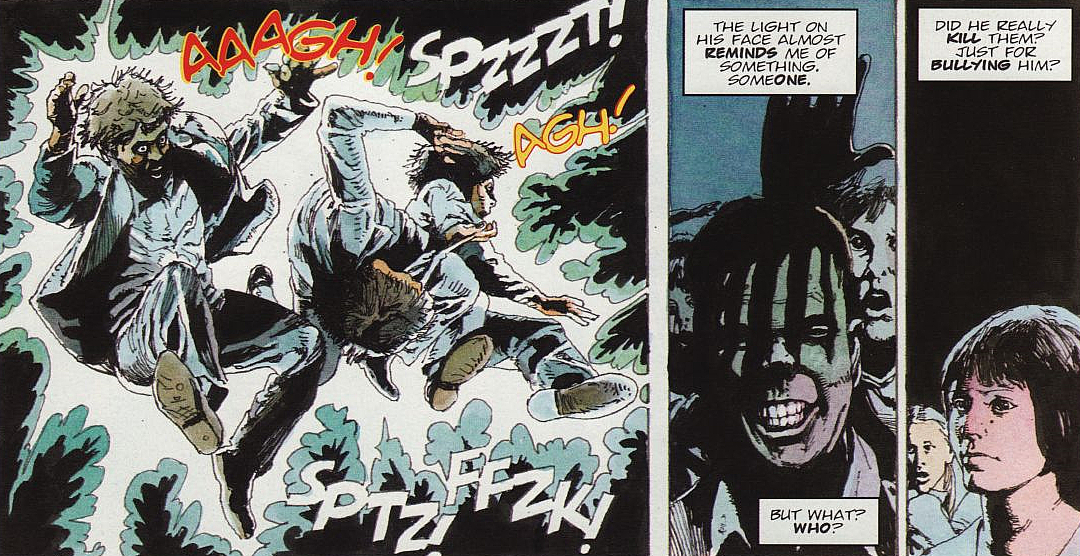 Sandra suspects one of the group has betrayed them, Fuego.  He turns up later though, having been shot, and the remaining resistance members head off to kill the Sisters, knowing that they are the ones who will go on to create the real Judge Death.

However, their attempt is foiled when when Fuego turns his gun on the other resistance members.  He reveals he is a Judge, presumably the man who would go on to become Judge Fire, and then Death shows up, already transformed.  His metamorphosis sped up by the Sisters as a reaction to the Fuego’s intelligence.

Eventually Judge Death turns his attention to Sandra, still groggy from the poisons the Sisters gave her.  As he goes to kill her, Half-Life intervenes but it is no use and Sandra ends up at the mercy of Judge Death.

However, at this point Judge Anderson wakes up from her coma but at this point she realises what has been going on.  This was all a nightmare, created by her own mind as a warning.

Judge Death has infected her with a virus, the Half-Life virus.  If she leaves, the city and then the world will be infected.  Everyone will die.  Anderson, resigned to her fate, puts herself back into a coma.  Her last thought, “Death always wins.” 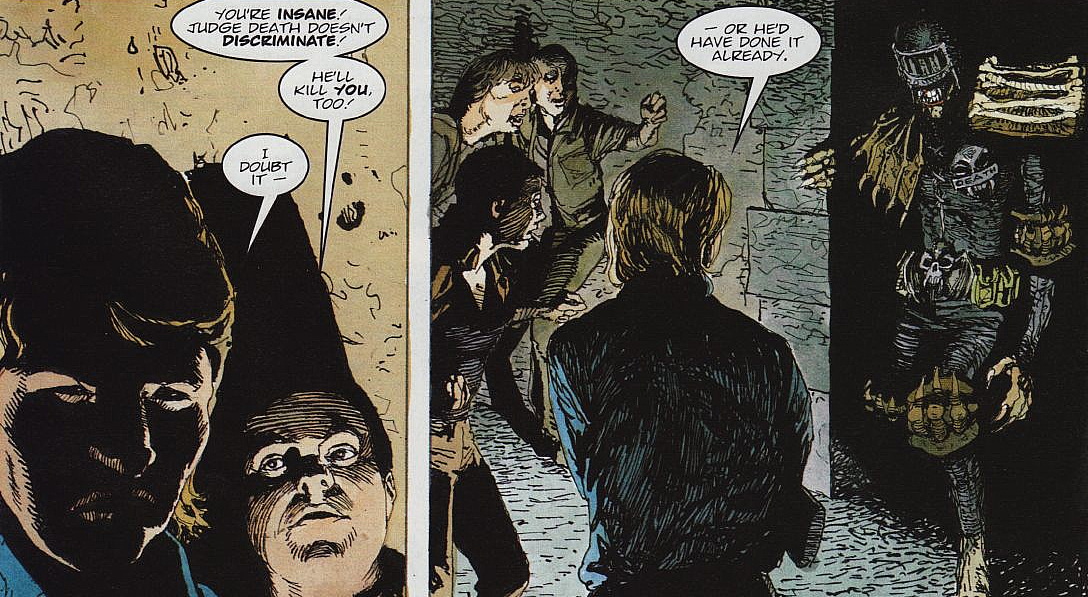 In hell.  Fire, Mortis and Fear in captivity.

The only way to get this is to buy the Megazines or pick up Psi Files Volume 04 which compiles Half-Life  with a bunch of other Judge Anderson stories including the rest of the Half-Life disease story. 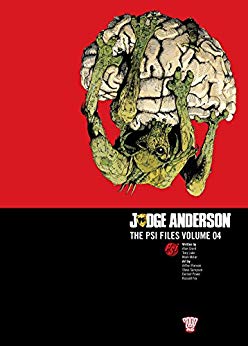