Home continues the Fall of Deadworld prequel saga with this one-Prog story.  Think of it as a status update for the main characters after the much longer Cursed.  Each of the characters – Jess, Fairfax, Psiren, Casey, Gates and Judge Fear – all get a few panels.  While Home is pretty short, at just six pages long, it feels like Kek-W is almost putting them on the chess board, establishing where they are and setting up the rest of the Fall of Deadworld series.

Even in such a short space, Kek-W and David Kendall continue to produce spectacular work here.  Psiren begins to stand out as the most interesting character and we finally get a good look at Judge Death as he steps out from the shadows and into the story properly.  It’s still incredibly bleak stuff with some really interesting nods to just how messed up the world has become.

At this point you start to wonder if Kek-W is trying to outdo John Wagner’s current work with Dominion or if he and David are somehow daring each other to take Death’s story in as dark a direction as possible but whatever it is, we’re fully on board and, as with all of Fall of Deadworld, it’s essential reading.

Home follows on from Cursed.  Sister Psiren, Judge Fear and Casey, along with their prisoner Judge Fairfax, are headed back to base.  They notice that a giant fire, started by the fire department to keep out mutants and resistance fighters, a sign that things are getting even more messed up.  On arriving, Psiren orders some Judges to take Fairfax to a holding cell while Casey asks Tucker (who is wearing Judge Fear’s helmet) about his move over to their cause.

Tucker, now just a host for Judge Fear, says that he is no longer Tucker and when Casey reaches into his mask, his hand goes right inside and is frozen.   A pretty solid indication that Tucker, who we learned previously is possible Jess Childs’ father, is now fully taken over.

Judge Lopez explains to Psiren that due to a lack of Judges, they’ve had to improvise and have been attaching A.I. chips to corpses and reanimating them.  There’s some particularly dark imagery here as it appears that they’ve grafted skulls onto childrens’ bodies, grafted on the AI chips and are using them as hunting dogs.  Which shows you just how few fucks Kek-W gives about toning down this story! 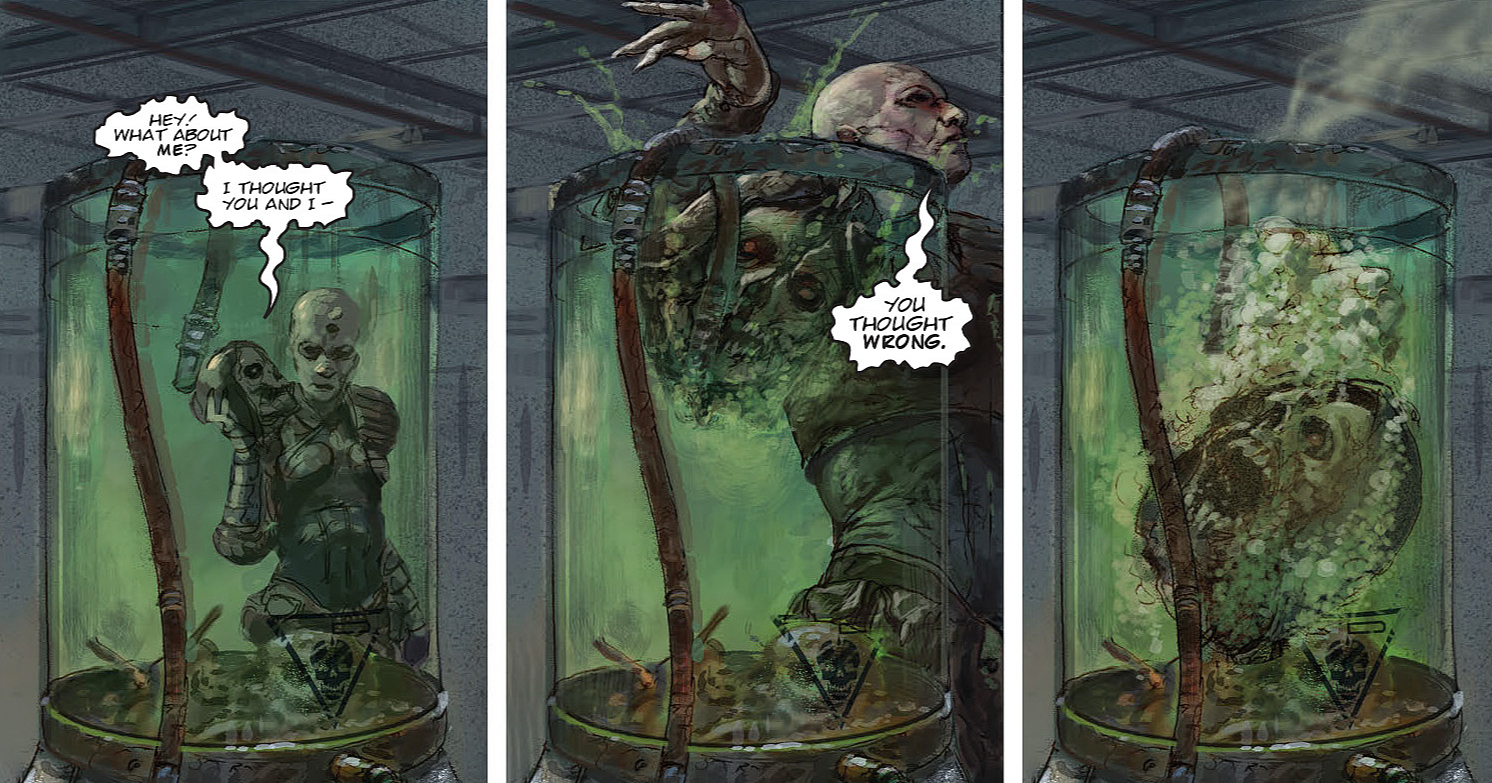 Psiren and Casey meet up with the Sisters of Death, Phobia and Nausea.  They sense a change in Psiren who has been able to see them for what they really are, potentially beings from another world or dimension here to destroy all life on her planet.  She resists their questioning and explains how she’ll only answer to the Chief Judge himself, especially as she has captured Fairfax and killed Jess, ‘the Judge Child’ (who, was actually rescued by mutants at the end of Cursed).  She leaves, warning Casey to stay away from them.

She takes Casey to a workshop and tells him to create whatever he wants (as long as they are “terrible things”) but that he reports to her and only her.  With them is Gates, now a living severed head, who asks about his fate.  She throws his head into a vat of acid, letting it burn for a short while, before taking it back out and he explaining how he won’t be getting off that easily.  She hates him which is fair enough as so far he’s been Fall of Deadworld‘s biggest arsehole.

Psiren then finds a space to be alone and we see that she was resisting the Sisters when she spoke to them, psychically hiding the truth which is that she now remembers who she was.  She was Lisa Soren.  And when Proudwater reconnected her to that memory in Cursed, something changed within her.   She remembers but will continue to hide this from the others.

On the final page of Home, we see Fairfax in his cell.   His ex-partner Collins enters the cell.  She was previously mentioned in Tainted in a flashback where Fairfax’s wife was accusing him of having an affair with Collins.  Fairfax is shocked given that the last time he saw her she was dead.  She’s been reanimated, albeit with a severely broken neck that is causing her head to flop down to one side.  Collins explains that this is a gift to him.  He doesn’t have to ask who from as Judge Death walks in, making his first proper appearance in the Fall of Deadworld series.  He says “My star pupil. My protege.  Welcome Home” as the story ends. 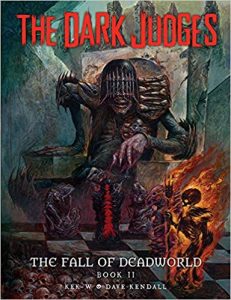