Operating in a truly alternate timeline, this Judge Death story is both familiar but different enough to be interesting. It was published across three issues of Lawman of the Future, a spin-off series that tied in with the 1995 Judge Dredd movie starring Sylvester Stallone.

Writer Robbie Morrison seems to have been given a lot of freedom to retell the Judge Death story, giving him an entirely new origin as well as never before seen abilities.

It’s actually a pretty good story that has a darker feel than the other mid-’90s Judge Death efforts (even if Lawman of the Future was aimed at a teen market and therefore the violence was toned down a lot). There’s still a bit too much humour from Death but that is tempered a bit. Instead of being an entirely comedic character, he now feels more like a Bond villain, dropping in one liners but mostly focused on doing the business.

Alex Ronald’s art is also very impressive and because this really is a one and done effort, it’s worth checking out. Finding it is another matter though!

Judge Death opens with Death warping from his own dimension right into the path of a prison transport vehicle. He admires the criminal intent of these prisoners but dispenses justice quickly before turning to the transporting officers.

He’s aware of Dredd somehow and converses with him over the radio before possessing one of the officers and making him give the order to release prisoners at the local Iso-Block. This is just so that he can dispense justice quicker to them.

Dredd turns up to arrest Death, not knowing who or what he is, and during the battle he loses his Lawgiver. However, when Death is able to fire it without his hand exploding, it becomes apparent that he must somehow share DNA with Dredd.

The interesting thing is how he loses his gun. Death is able to send out his spirit in long purple tendrils and physically touch things with them. Something we’ve not seen from him before. This is thanks to a soul gem that he carries that holds all of the souls of his victims and is the source of his power.

Eventually, Dredd gets the upper hand, destroying Death’s body. Of course, you cannot kill what does not live, and so Death escapes, leaving his host body behind.

Judge Anderson examines the body and is able to fill in Death’s backstory. This isn’t the Judge Death that we know, this version was Judge Dredd but in a parallel dimension.

A legendary lawman, like our version of Dredd, this one served in a version of Mega-City One that was far more violent and dangerous. He was eventually killed in the line of duty but rose up from his grave purely because of his will to continue dispensing justice. However, this new undead version was committed to the usual ‘all life is a crime’ Judge Death doctrine.

Death’s spirit attempts to attack Dredd one more time but Anderson thwarts him using Death’s own soul gem, trapping him with the souls of everyone he has killed before. Dredd, knowing that he can’t kill him, decides that an eternity in the gem would be a fitting punishment. 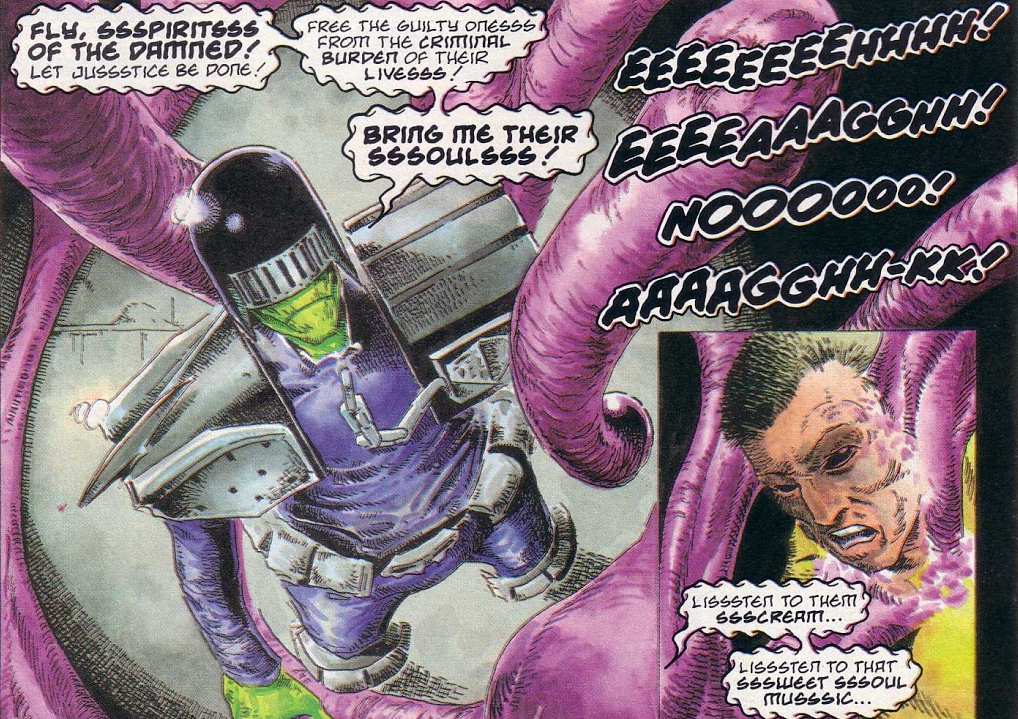 Locked in a maximum security facility.  Along with the other Dark Judges.

This one might be tricky.  You’re looking for Lawman of the Future issues 8, 9 and 10.  This was never reprinted and so you’ll be looking on eBay for this story. 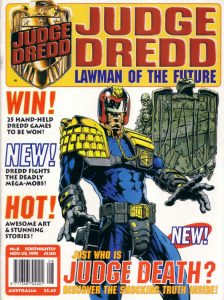