Judge Death: The True Story is a curious tale and a typical example of 1990s Judge Death storytelling.  Taking place with Judge Death’s cell in high security, this story opens with Death offering a cup of tea before re-telling the story of his early days on Deadworld and ends with him visiting England, namely Bexhill-on-Sea.

Again, the focus here is on humour, and feels like the great John Wagner is phoning it in.  We’re not huge fans of Ian Gibson’s art style either and when he’s drawing Death as a smiling buffoon, it doesn’t make for a great strip at all.

The True Story is framed as Death’s attempt to undo the hack job that Brian Skuter did on him during Young Death.  He’s in captivity but is sitting down with the reader, telling the story of how he came to Mega-City One before the events of the original 1980 Judge Death strip.  He also reflects on other moments in his early 2000 AD history, giving the reader a different view of those stories.

His main point, the story he’s trying to tell, is about Judge Dredd and how Death believes that he and Dredd share a similar view on crime and the law.  Dredd’s always been a little single-minded and perhaps Death sees similarities there.

He then tells the reader about an incident where he managed to jump back in time to the East Sussex town of Bexhill-on-Sea.  He came across a 96th birthday celebration attended by a lot of very old people and attempts to dispense justice to them but Dredd was able to track him down and trap him, cheaply and easily, in a suction trap.

If, for some reason, you want this one it did get reprinted in Judge Dredd: Case Files 21.  This compilation only features this one Judge Death story. 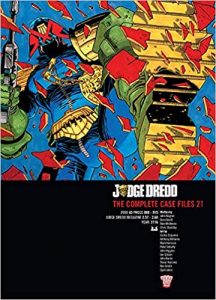