Anyone with even a passing interest in comics from the 1990s will remember that it was a decade of crossovers with all sorts of strange and interesting combinations of characters doing battle.  We blame Aliens vs. Predators but it was something of a sickness in the industry.  So it was no surprise that 2000 AD would get in on some of that action but Judgement on Gotham was a real surprise.  Who could have predicted a story where Judge Death would face off against Batman?

This story was also unique in that it didn’t feature in a Prog or Megazine.  Instead it was published as a graphic novel instead, giving even weight to Batman, Dredd and Death.  John Wagner and Alan Grant continued their winning combination with the script and the great Simon Bisley made his Judge Death debut with this one, providing some incredible art.

Judgement on Gotham is an absolute classic Judge Death tale and actually sits in the main timeline, despite the DC crossover, in that interesting period, post-Necropolis, where he was having solo adventures while the Dark Judges were still in captivity.  It does however continue the trend of giving Death a sense of humour, taking him from an unrelenting superfiend to something a bit more silly, kind of like Skeletor from the old He-Man cartoons.  This really gets ridiculous during a concert half way through the story but, despite that, this is such an excellent story and one that we can fully recommend as an essential entry in the Judge Death story. 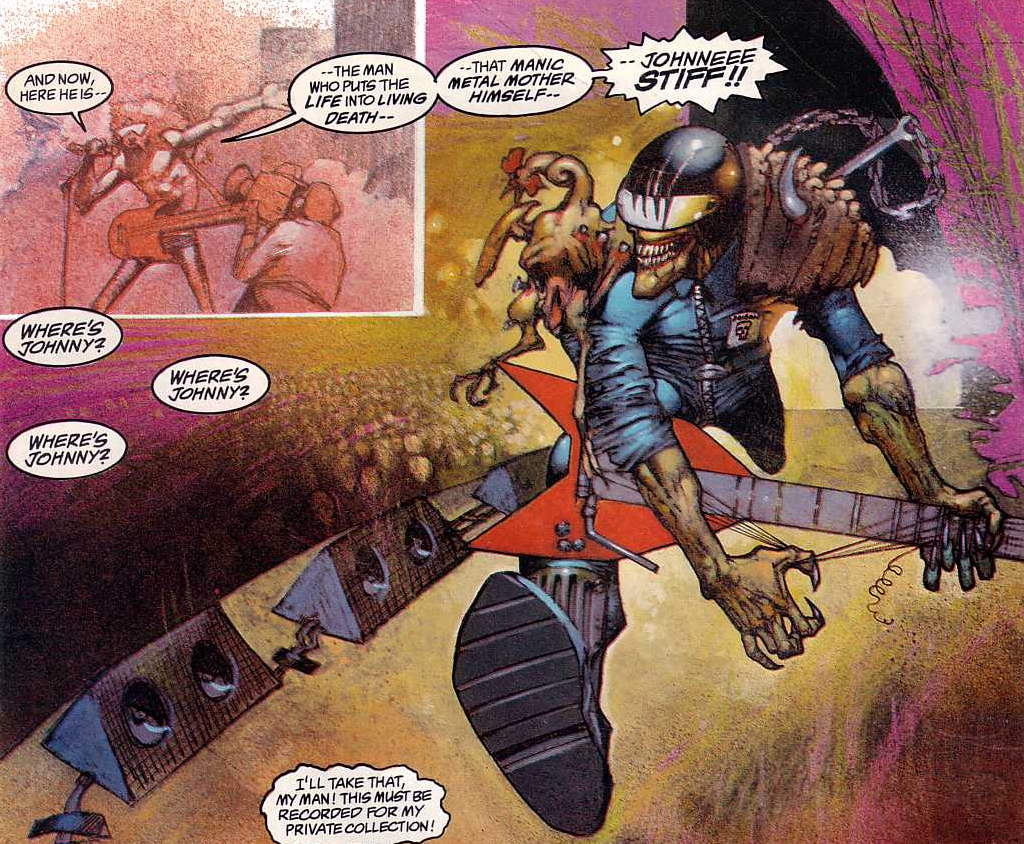 Judgement on Gotham begins with Judge Death doing his usual psychopathic murder thing but when his victims’ screams are heard by Batman, we realise something is up.  So does he when he defeats the body of Judge Death but sees his spirit escape and while examining the body, he finds the dimension jump device that brought Death to Gotham City.  Batman accidentally triggers the device and ends up in Mega-City One where he meets Mean Machine who is in a typically bad mood having been betrayed by Judge Death after they team up.

After they scuffle, Judge Dredd turns up to find Batman fighting Mean Machine and when the latter triggers the dimension jumper, Batman is left to face Dredd who arrests him and takes him in for interrogation.  This is where some of the best writing in the story occurs with Batman and Dredd both giving as good as they get before Batman escapes, knowing that he has to find a way home so that he can defeat Judge Death, and Mean Machine as well. 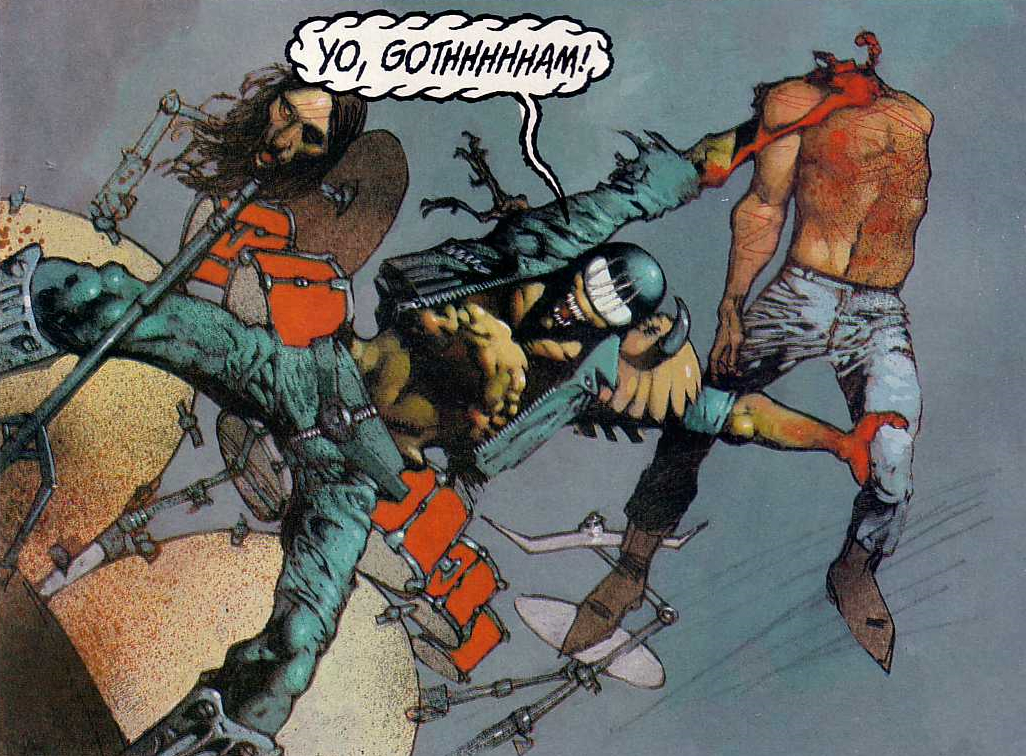 Meanwhile, over in Gotham, Judge Death meets Scarecrow. the master of fear.  Scarecrow resurrects Death’s body and they team up (after the inevitable attempt by Death to ‘judge’ him, which leads to some hilarious results).  They go to a concert (the band’s called Living Death, naturally) and decide to spread fear and death to the audience.

During this time, Batman is aided by Judge Anderson who realises that he needs her help and that Dredd’s rigid insistence on sticking to the law is wrong in this situation.  They make it back to Gotham, where the final battle between them all occurs.  Anderson takes on Scarecrow and Batman takes on Judge Death before being rescued by Dredd.   Batman then returns the favour, which allows Anderson to surpass herself and trap Death’s spirit in her mind.

They then subdue Mean Machine before Dredd and Anderson leave to get back to their dimension and Mega-City One but not before a little alpha-male stand-off between Dredd and Batman that Anderson has to break up. 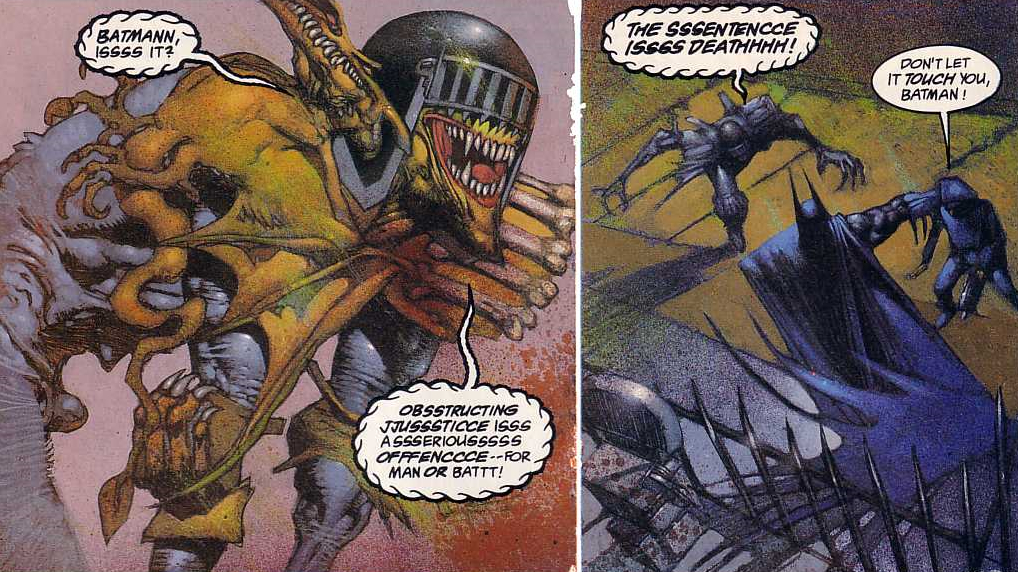 Trapped in Judge Anderson’s mind (with the implication that she’ll put him in a holding cube later).  Fire, Mortis and Fear encased in plasteel cubes and locked into a secure vault.

If you want this, you’re best of getting The Batman/Judge Dredd Collection as this adds Die Laughing as well.  It’s pretty pricey on Amazon (link below) so I’d recommend trying your luck on eBay. 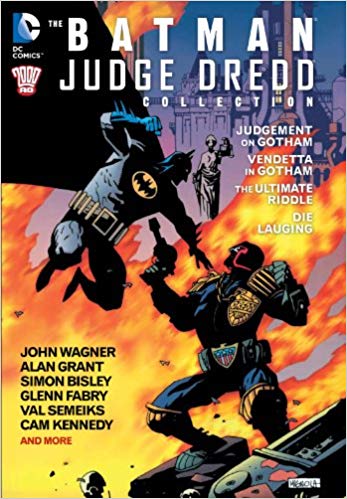