Another one-shot tale, this 1996 strip appeared in the Megazine and features Dredd facing off with Death yet again in something of a cold opening.  Which might make readers wonder how Death got there but it soon explains itself.

From a writing point of view, there’s not much to this one. It doesn’t advance the Judge Death story at all and ends suddenly and slightly ambiguously.

At only nine pages long Killing Grounds doesn’t give John Smith (writing as Johnny Mondo) much of a chance to show off his talents but Dean Ormston, who would go on to illustrate a Judge Death story again, does a great job here with some great art that really elevates the strip and reminded us of Simon Bisley’s great work on Judgement on Gotham.  But in the end, this isn’t an essential tale and one for hardcore collectors only.

Killing Grounds opens with Dredd on patrol, seemingly reluctantly. Screams alert him to a crime and when he gets there he is faced with Judge Death who is doing his usual serial killer thing.

Dredd unloads with his bike cannon but Death attempts to get the advantage by unleashing some sort of dog of death on him (and if Mumm-Ra can have a dog, why can’t the most evil superfiend in the universe?).  However, Dredd escapes by shooting a power line and electrocuting the beast, before dropping Death into a conveniently-placed factory where his body is impaled.

Death bails on the body but is captured by some sort of industrial fan before being transferred into an empty spaghetti jar. It’s all fairly ridiculous.

We then find out that this is a simulation which allows Judges to train for any eventuality where Death might escape. Dredd has been ordered to run the simulation a few more times, which he is planning to do on another day and so he leaves.  However, the operator of the sim suddenly finds that it has been switched on again and is suddenly confronted by Judge Death.

The strip ends there with no indication of what happens next and while it is implied that Death is still part of the simulation, it is possible at that it is the real thing.  Although that would be weirdly coincidental.  It must have been quite confusing at the time though. 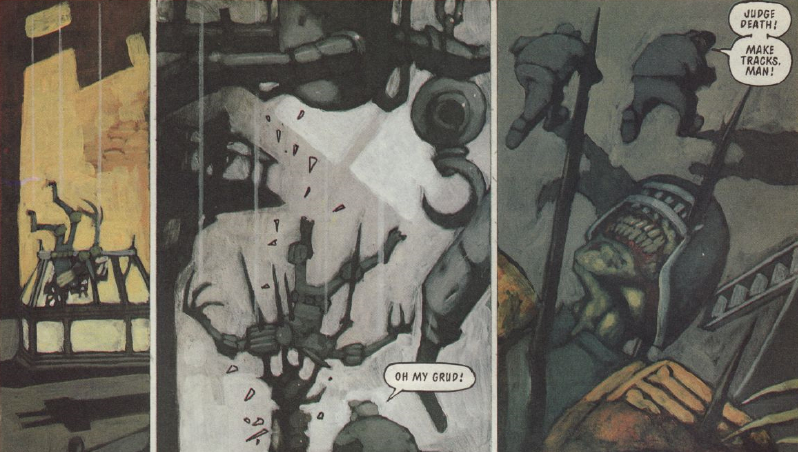 This story is reprinted in Judge Dredd Case Files 24 along with a lot of non-Death stories. 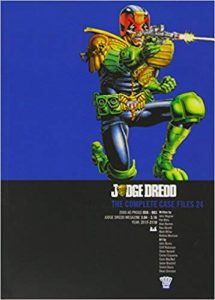