No Future is something of a curio in the Judge Death archives.  It was printed in New Scientist, a science magazine, across two issues at the end of 2017.  Now, Death had made some odd appearances before with stories in newspapers such as Metro and The Daily Star (if you can call that a newspaper) but these were fairly disposable entries.

This one is different.  Firstly, it’s a Kek-W story and if you’ve read our recent entries on this blog, he’s been on fire with his Fall of Deadworld series which is some of the best Judge Death storytelling ever.  So getting him at the peak of his powers is quite something.  But also, No Future has a genuinely interesting concept that isn’t watered down for the audience.

It’s a tricky one to track down physically but reading it is no problem as New Scientist have the whole thing scanned here (although please note, the image quality isn’t great and we’ve had to sharpen the images that you see in this article).  As it is set in the future somewhat, you could almost consider this the last entry of the main timeline so far but as it ‘feels’ like a non-canon story, we’ll class it as an alternative.

Kek-W tells a brief but interesting story, which throws in a few scientific concepts for New Scientist’s usual readership, and the art, by Patrick Goddard, is clean and stylish.  It’s more traditional and comic-like than David Kendall’s work on Fall of Deadworld but it does suit the future setting and helps Kek-W get his story across.  So overall this story is well worth a look. 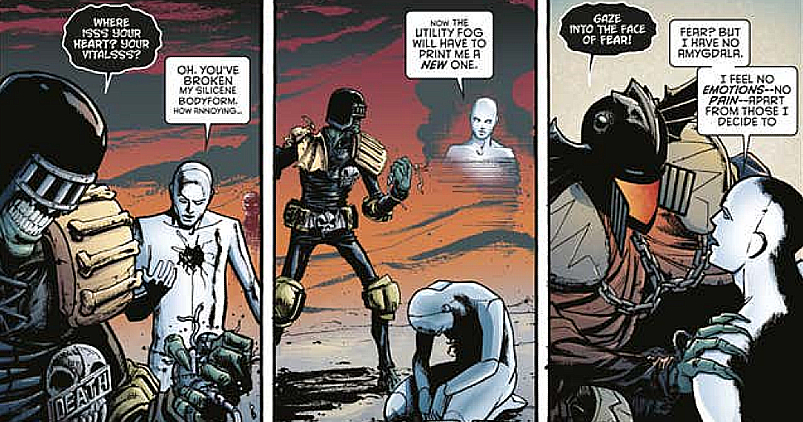 No Future begins with the Dark Judges on Deadworld looking through a portal at Dredd and Anderson in Mega-City One.  As ever, they are desperate to deliver their own brand of justice and so Mortis, who under Kek-W’s stewardship has become the Dark Judges’ science officer, sets up a dimension jump.

However, as they are travelling a black hole disrupts their journey and when they arrive Mega-City One isn’t there.  Death goes to punish Mortis who, as he’s being strangled by his Chief Judge, realises that the buildings are in the sky and that this place is more advanced than it should be.  He realises that they are in the right place but are in the future.

Some beings, networked humans arrive, and the Dark Judges attempt to kill them however the atmosphere itself protects them.  Judge Fire is unable to ignite due to fire suppressors in air, Judge Mortis is rendered powerless due to the anti-disease eco-phages in the atmosphere and when Judge Death attempts to go old-school and put his hand through the heart of one of the people, a new body is 3D printed for him.  Judge Fear is also rendered ineffective as these people have no amygdala and are able to decide what emotions they want to process.

The people are fascinated and decide to study the Dark Judges.  Judge Death explains to them that a sickness took over his mind and that he wants to be cured.  And so they agree, hooking him up to network which will be able to heal him.  However, once he’s connected, Death drinks some of the Dead Fluids which corrupts everything.

Each of the Judges gets their powers back (apart from Fear who goes to his plan B which is to fling beartraps at people) before Death orders Judge Fire to ignite the atmosphere, burning down everything and killing everyone.  What’s interesting there is how Death is able to achieve the same results that he got on Deadworld but in a fraction of the time by turning the technology on the people.

This wasn’t reprinted so you’ll need to buy the issues directly if you want to own this physically.  Click the link below and follow the ‘Buy in Print’ or digital links for issues 3157 and 3158. 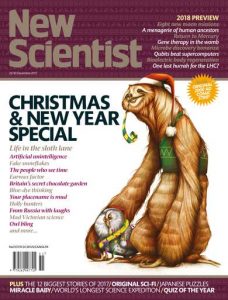