Oddly this collection of stories didn’t get mentioned in the now-defunct Wiki page or on Judge Death’s BARNEY profile but is a collection of legit Judge Death/Dark Judges related stories that take place during Necropolis.   There are six stories, each one originally printed in a Megazine in 1995.  Collectors might want to look out for the separate volume that collected these.  It came with Megazine 355 in December 2014 and while it is out of print, we picked up ours on eBay for just a few pounds.

Si Spencer writes each of the stories but the artist each time is different.  There aren’t any artists that Judge Death fans will recognise and because of the varied nature of the art, we’ll be ‘reviewing’ each story separately below.  However, as a collection it’s worth picking up and while Plagues of Necropolis doesn’t always get the best reception from fans of 2000AD and Judge Death, we like anything that gives an extra look at Necropolis from the Dark Judges’ point of view because it did feel like they were under-utilised during that story.

Sleeping Enemy is set in a Tropicarium where Dr. Moore is working.  His job is to protect the last piece of rainforest and he lives amongst the plants and trees, happy to be a part of nature.

However, when Judges Fear and Mortis show up looking for people to judge, they find Dr. Moore’s work and decide to destroy it by waking up a dormant species of insect (some sort of weird beetle thing) that tears everything and everyone apart.

This story isn’t long enough to really build into anything but it is nice to see Mortis and Fear on an outing.  The art is odd though.  The overall style is okay, it’s quite nice and detailed with tasteful colours but Fear and Mortis are drawn in a different way with thick lines.  They almost seem like O’Ready is drawing them as sprites from a videogame.  It’s a bit jarring but overall Sleeping Enemy is an okay short story. 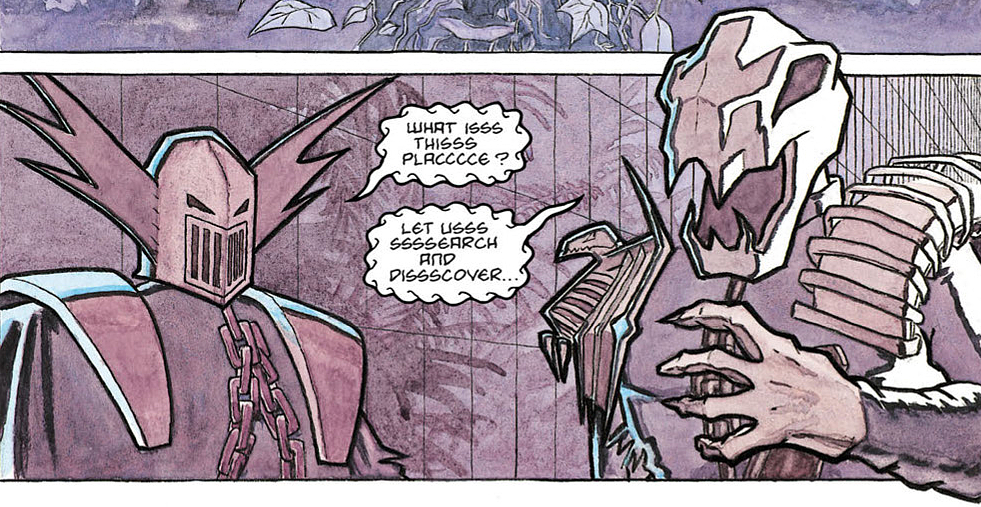 This story features a clean up crew trying to deal with a large number of bodies under a residential block.  There’s so many though that they decide to shut off air to the entire area.  They head upstairs with some survivors of the Necropolis and take some sleeping pills in order to get somehow rest after seeing such horrors.

Unfortunately, while they are asleep, some maggots crawl in through a vent and infect all of them.  Some time later they all metamorphose into human-sized flies before finding themselves ambushed by giant toads.

Despite having some great art by Pete Venters, this story is let down by obviously being total nonsense and because it actually has no Dark Judges in it.  The only thing of interest to Dark Judge fans is that the maggots from the bodies they leave can turn people into giant flies but this ability has never been explored since.

That Perfect Skin is focused around Justin Welsby, a man who is selling a line of anti-aging beauty products.  Obsessed with his own looks and money, he ignores the warnings when the Necropolis starts and keeps selling to his customers.

Soon after that, all four Dark Judges come looking for people to judge and start wiping out his customer base.  Welsby runs and hides in a storeroom, however the Dark Judges have (somehow) poisoned all the food and so when he is eventually rescued and a camera crew reports it, his face is now full of boils and pustules.

Simon Davis’ art style on this story is pretty chaotic but it looks good and Si’s story, despite being a bit too obvious, is a fun read.  Especially as the Dark Judges do get a decent bit of panel time in it and do show off some creative kills.   In this anthology of tales, this is one of the better ones. 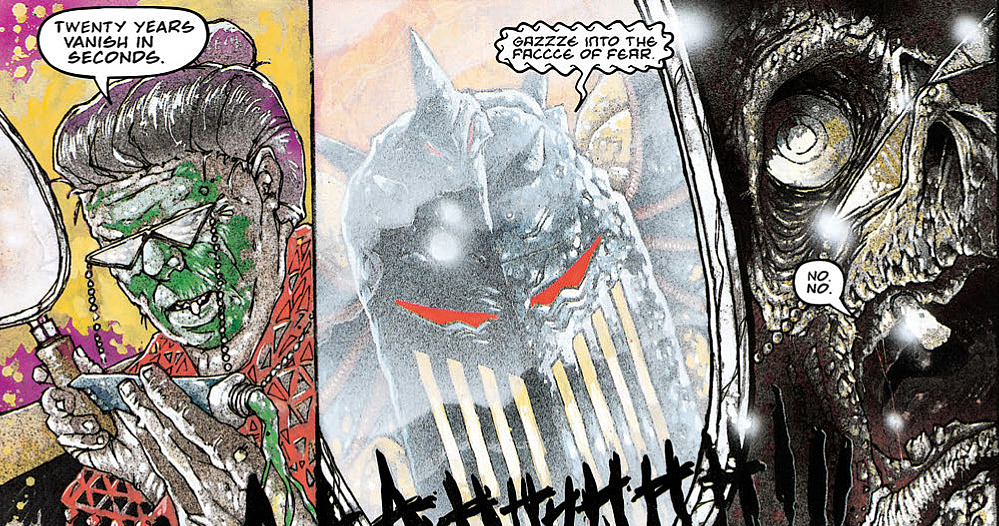 The Reign of Fear

This story is quite something.  There are two parts to it.  Firstly, there’s a man who is breaking curfew to gather supplies for his family who are locked down due to the Necropolis.  He’s scared but he keeps telling himself “there is no fear” and so you can already guess how that’s going to work out for him.  At the same time Death and the others have broken into a weather control centre and are alluding to some sort of larger plan.

The man eventually gets home but runs into Judge Fear outside.  His family hear him on the intercom and assume he’s dead.  However, when they eventually go outside they find his head on the floor.  This is because Judge Death has figured out a way to make it rain human heads.

Okay, so this story is ridiculous and a little obvious but the pay off is actually very good and surprisingly dark.  The art style is a little basic on this one but there’s plenty of Dark Judge action in this one and so it’s worth a look.

This story has very little to do with the Dark Judges and instead focuses on a woman, Ginny, who has sealed herself in her apartment.  She’s a massive germophobe and is trying to stay clean but when her sister, Leslie, shows up asking to be let in to escape the horrors of the Necropolis, the Ginny won’t let her in.

The sister starts battering the door down and so Ginny is forced to let her in but immediately batters her with a statue, cutting herself in the process.  She takes a shower, desperate to clean herself but outside a Judge notes that all huge number of bodies has been put in the water supply.  We then see Ginny in the shower, beyond traumatised as her shower sprays blood all over her.

While this story doesn’t feature the Dark Judges, it does evoke memories of a similar story from the 1983 horror portmanteau Creepshow.  And for that alone, we endorse this story.  The art again is pretty simple but it is effective and so overall we are happy to recommend this one. 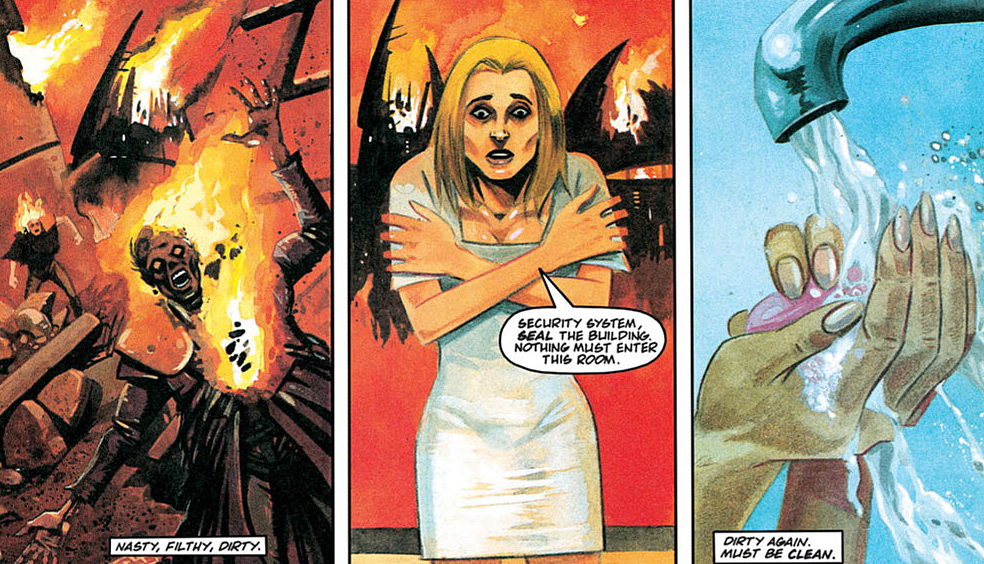 This story, the second to be drawn by Jim O’Ready in this anthology, is possibly the darkest.  Set in a school for gifted children (uh-oh), a teacher is talking about Judge Dredd and Mean Machine to the children.  The school’s Principle, Dr. Jacobi isn’t convinced that the children should be hearing about such tales of violence, especially his own son, Jacob.

While securing the school, Dr. Jacobi runs into Judge Death.  He pleads with Death to take him and spare the children, but Death is unmoved and goes to judge them first.  Jacobi gives chase and enters the room all guns blazing.  He accidentally shoots his own son and holds his body while Death carries out his sentence.

Okay, this one is dark.  It’s a good tale and O’Ready’s highly-stylised art isn’t quite as jarring here as it was with the first story.  It does show Judge Death at his most uncompromising worst too.  The only knock on this story though is that it is very short and so not much else really happens. 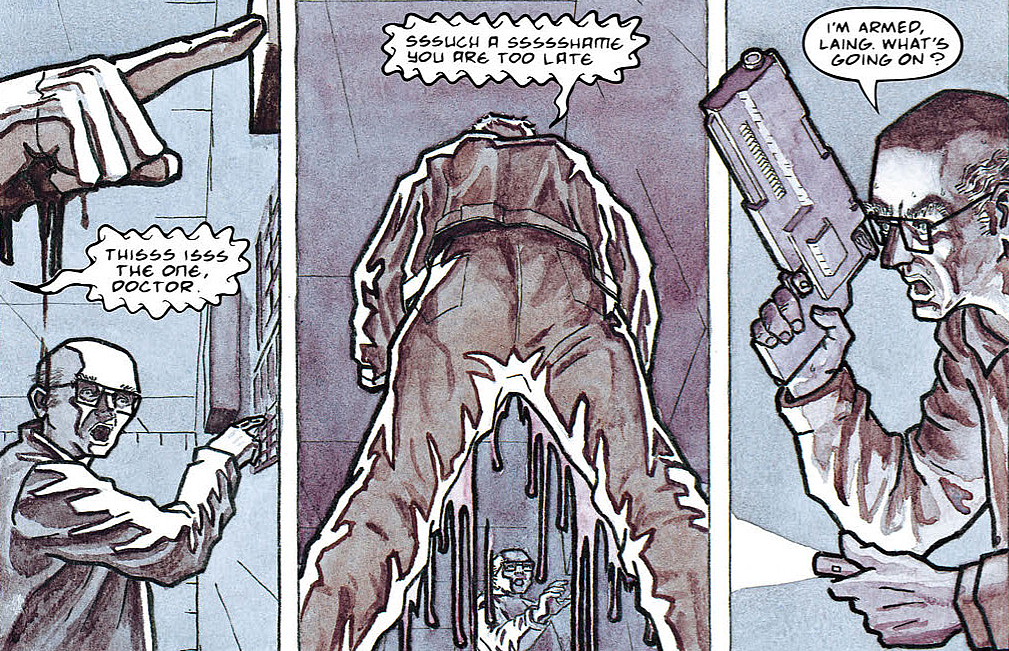 You’ve got two options here.  Pick up the individual Megazines from eBay (or digitally from 2000 AD) or try to get the collected works as part of Megazine 355.  You might want to look on eBay for the volume that came bagged in with it though.  See below for the artwork.  Note:  this volume also included Death Becomes Him. 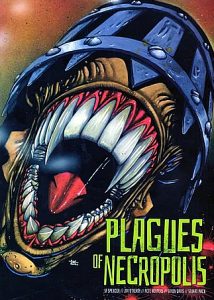