Skip to content
History
First published in Progs 733-735 in 1991.
Writer: Garth Ennis
Artist: Carlos Ezquerra
Another story that focuses on the post-Necropolis Mega-City One, Return of the King looks at the fate that befell the man in charge at the time, Chief Judge Silver.   Judge Death gets minimal time in this story, featuring only in flashbacks.  But you do get a glimpse into his actions during Necropolis, which is welcome as he doesn’t get as much attention in that story as you’d have hoped.
The story is written by the well-known Garth Ennis who would go on to create Preacher and The Boys.  Ezquerra, the legendary Dredd artist, was responsible for the visuals.  A great combination of two immense talents and while Return of the King is a fairly brief tale, it is one that is powerful and pretty dark even for 2000 AD.
While the story doesn’t advance the status of Death or the Dark Judges, it’s a great insight into the Necropolis and one for Death fans to pick up.
*spoilers ahead* 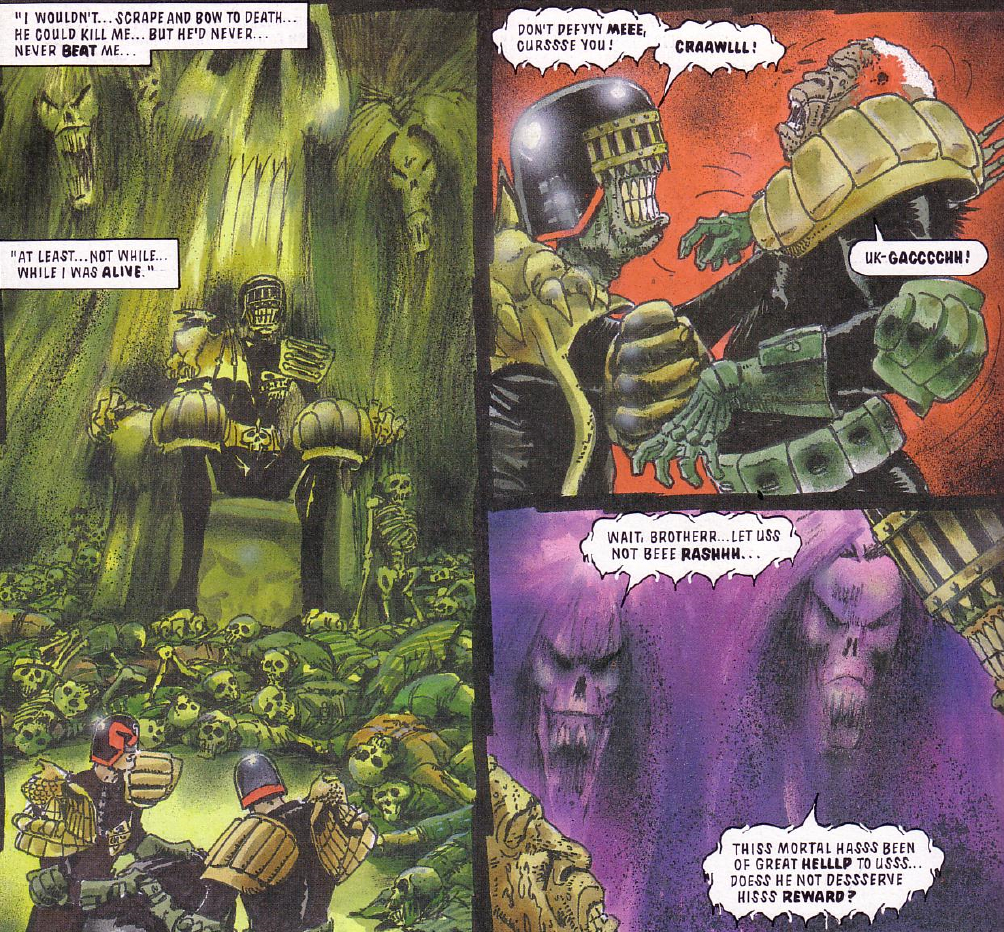 Plot Overview
Return of the King opens with a near-dead mysterious figure rising up from the dead following the Necropolis.  Initially, you think it might be Judge Death himself, but it soon becomes apparent that this sorry figure is Chief Judge Silver, the man who was in charge when Necropolis happened.
In his deranged state he decides that he needs to return to the Mega-City and plead for the forgiveness of the people.  He heads to the Hall of Justice where he confronts Chief Judge McGruder, a key player in the fight back against the Dark Judges and Sisters of Death.
Eventually, Dredd is called over and begins questioning Silver who explains that when Necropolis started, he attempted to commit suicide, knowing that Death would take sadistic pleasure in tormenting him. 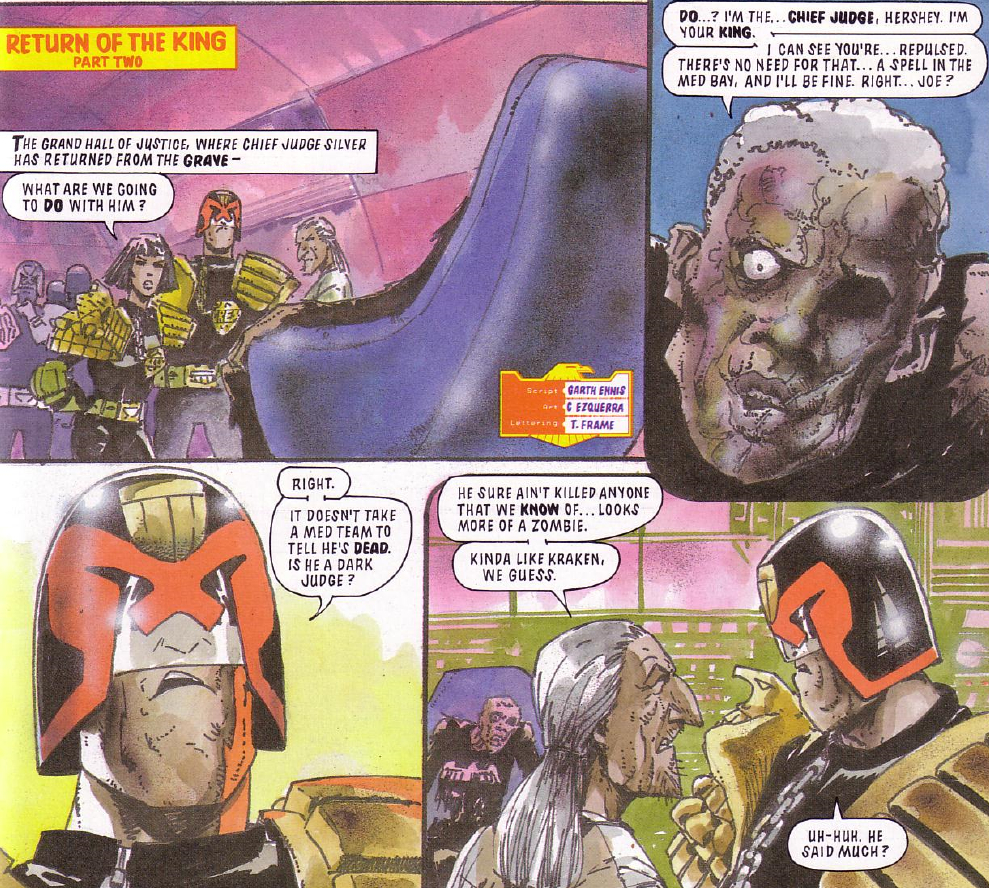 He shot himself in the head but it didn’t finish him off and his fears were realised when Death discovered him.  Initially he resisted Death but when Death turned him from barely-alive to actually-undead, he was powerless.  A mere pet, tortured and tormented by Death until the Dark Judges were defeated.
He then goes on to explain that he’s still in charge.  McGruder had taken the long walk but Silver hadn’t and so Judge Dredd is forced to agree.  The law is the law, even if he had failed the people of Mega-City One and was responsible for the decision to replace Dredd with Judge Kraken, a key reason why the Sisters of Death were able to make Necropolis happen.
Despite agreeing with him, Judge Dredd has enough authority and legal reasons to terminate Silver’s second tenure as Chief Judge in his own inimitable way.  And just like that, Silver’s story is done. 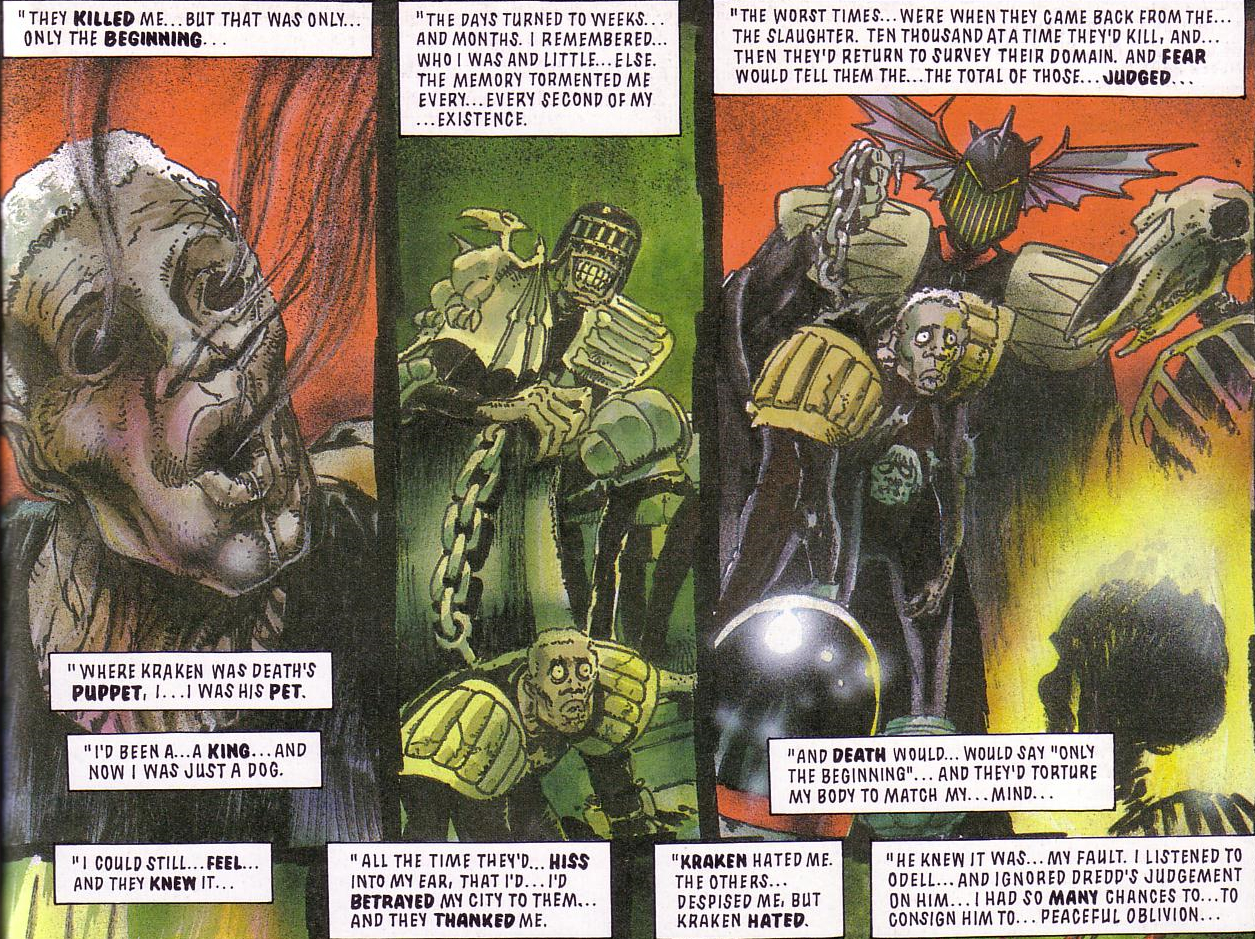