First published in the Metro newspaper in 2004.  Since reprinted once in Megazine 230.

Here’s a real rarity.  Metro, the free newspaper, ran a daily Judge Dredd strip known as ‘Beyond 2000 AD’ from Jan 2004-Jan 2005.  And for five days in 2004, this Judge Death related story showed up.  It did get a reprint in Megazine 230 (across the bottom of five pages, much as the newspaper would have printed it) but is pretty much forgotten by all but the most ardent Death-heads.

It’s very much a side story but is interesting because you’d expect it to just be an introduction to Judge Death but instead it focuses on an actor playing the part of Judge Death losing his marbles after playing the role for too long.  Something we’ve seen Wagner write about before.

This one is far from essential but Wagner and Clarke do a good job in very limited space.

This one is very brief.  It is set in the ‘Necropolis Reenactment Society’ which is a sort of museum that shows the events of Necropolis.  A few people are there watching a reenactment of Chief Judge Silver’s “execution” at the hands of Judge Death (in fact his actual execution was carried out by Judge Dredd in Return of the King).  However, the actor playing Judge Death goes off-script and starts attacking the punters (much like in Death Becomes Him).

Dredd is called to take him down which he does with a bullet (because, you know, Dredd) before remarking that there’s something about playing Judge Death that gets to all the actors.

Free in Mega-City One.  Dark Judges in captivity.

You’re not going to find the original issues of Metro, so your only bet as a completionist is to get Megazine 230 on eBay.  Or digitally via the link below. 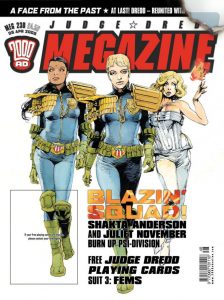