This one nearly slipped past us.  The now-defunct Judge Death Wikipedia site didn’t have it mentioned but it does show up on Barney, the 2000 AD database.  It features Judge Death and, of course, the lovely Mrs. Gunderson who you’ll remember from Boyhood of a Superfiend.  She was Judge Death’s landlady, who found herself at gunpoint when the Judges came to investigate Judge Death’s recent tenancy.

Tea With Mrs. Gunderson is a one-off story that was printed in volume two of the Megazine and only once since and while it doesn’t advance Death’s story particularly, it is a reasonably fun story that has some great artwork (reminiscent of Simon Bisley’s work on Judgement on Gotham).  It shows an interesting side to Judge Death, but again is the watered-down 1990s version of the character, played more for laughs than scares. 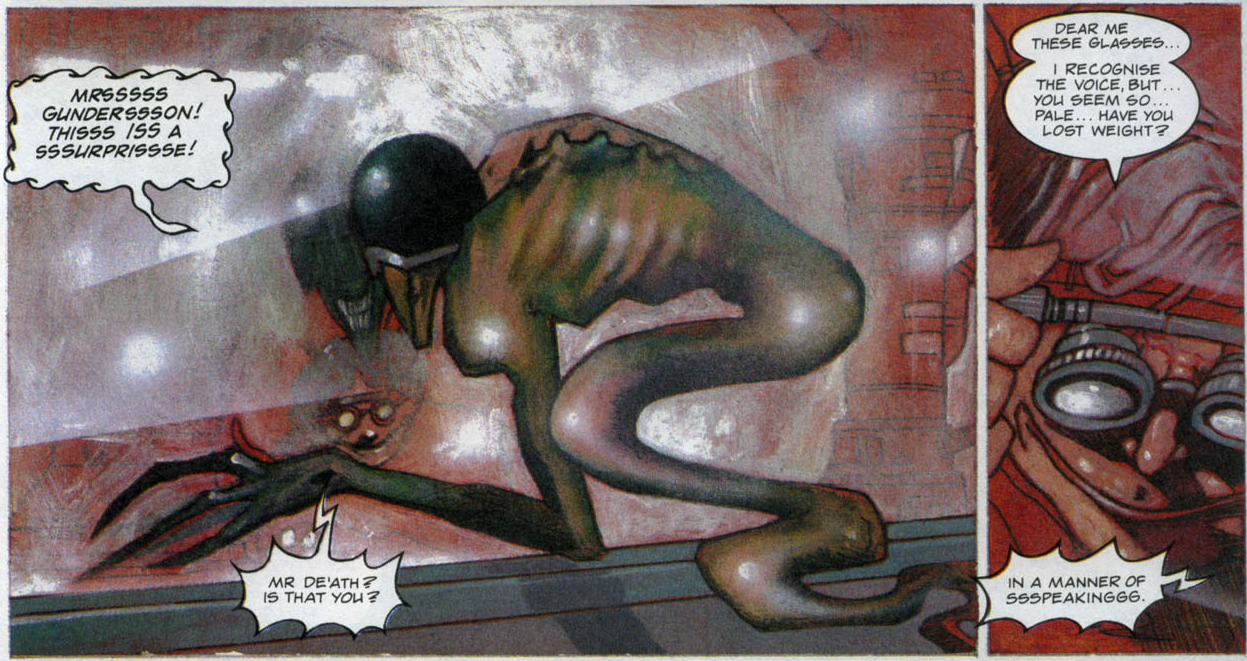 Tea With Mrs. Gunderson is a bizarre tale indeed.  Judge Death, now in his spirit form, has been in maximum security containment for some time and Mrs. Gunderson has asked to come and visit him.  After a year, her request is granted and she is led into his cube by a team of investigators who are puzzled as to why she is the one person that Judge Death never killed despite them being in an apartment together for all that time.

It turns out she’s not bothered about him being a superfiend but just wants her rent, after all “it’s not too much to expect for a gentleman to pay his rent.”  But then the investigators release him from his containment into the wider cube so that he can possess her, which he does immediately.   He then threatens to kill her if they do not release him, which of course they aren’t about to do.

They are monitoring her brainwaves and they realise that part of her is unaffected by Death’s intrusion into her mind and it is this part that has a conversation with the superfiend.  Mrs. Gunderson’s psyche is represented by a young girl at a tea party for her toys.  Death protests as Mrs. Gunderson imagines him to be a boy and goes to kill her.

Mrs. Gunderson forgives him as he does this, causing Judge Death to break down and realise that she is truly innocent and he returns, voluntarily, to his prison.  The investigators let her leave, while chipping in for Judge Death’s missing rent.

This only got reprinted once in The Life and Death of Judge Death which also carries a few other post-Necropolis stories (Young Death, A Night with Judge Death, Death Becomes Him, My Name is Death, The Wilderness Days).  It’s out of print though and so you’ll be looking for a second hand copy on Amazon (link below) or eBay. 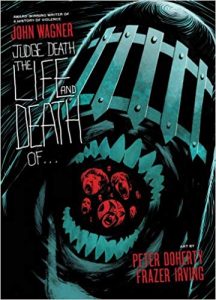 The Life and Death