Like Judge Death himself, we’re somewhat single minded  about what we do here and so we’re not too bothered about characters who aren’t touched by Judge Death’s story. Former Chief Judge Cal is one such character and this story reflects on the ramifications of his tenure as the top lawman in Mega-City One.  The fact that he’s based on the Roman emperor/sex pest Caligula gives you some idea how that went.

Judge Death’s appearance in this strip is a one panel affair which gives him the absolute briefest of mentions but, hey, we’re nothing if not OCD about these things.

The story itself is about a corruption case as the new Chief Judge, Hershey, goes after Judge Jura Edgar who has been holding onto a tape that incriminate previous Chief Judge Cal.

It’s not exactly essential reading for Death fans (although Wagner’s writing is good, albeit quite dense, and Wilson’s art is very clean and tasteful).  You can pick it up with another Judge Death story though (see link below).

The only way to get hold of this story as a reprint is via Judge Death Case Files 31.  On the plus side it does contain A Night With Judge Death (1999). 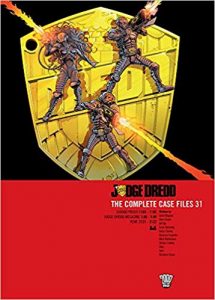