The Dead World is an alternate timeline story which is actually one of a number of comic sequels to the excellent 2012 Dredd movie.  In fact, this story was the last of the ‘movieverse’ comics and so it goes out pretty big.  So much so that we’re not sure how they ever would have been able to film a story like this.  This was the eighth ‘movieverse’ story but the only one that concerns us because the Dark Judges all make an appearance here.  That said, these are alternate versions, spawned an entirely different way.  Sidney De’Ath is the human that would become Judge Death and all four Dark Judges all operate much as normal (although Fear is a little different).

This is a really good story and one that gives its own spin on the Dark Judges.  While it is completely non-canon, it does feel nicely self-contained and at 52 pages long it has enough room to breathe and explore some of the new concepts it introduces.  Glimpses of the humour that became a big part of the Judge Death character a decade or so ago are in evidence here and while the horror aspects aren’t quite as strong as they are in Fall of Deadworld and the Dominion series, this is still a decent, hard-hitting story.

Henry Flint, on Judge Death art duties for the third time, does an excellent job here too, getting across the absolute insanity of the Dead World’s proximity to Mega-City One while keeping the panels clear and attractive.

The Dead World begins with Judge Dredd chasing a suspected arsonist through the city.  He catches up to him under a bridge and at the same time that the arsonist sets fire to himself, eight girls jump to their death from the bridge above.  Dredd doesn’t make any connection between the events and goes to investigate another problem,   A group of suspicious deaths at a lab that has been trying to develop a new source of energy to power Mega-City One.   He arrives and finds three dead scientists who have apparently died of heart attacks.  There are four missing also.

Meanwhile, one of the girls from the bridge awakes in her body bag.  Her face mangled, she says ‘Yessss’ in the familiar lispy tones of Judge Death.   We see her stood up with graffiti behind her that reads ‘You cannot kill what does not live’ and it might be in blood, so there’s a good chance at this point that she is indeed Judge Death.

Back at the lab, Dredd is shown the photos of the seven missing, or dead, lab workers.  One of them is Sidney De’Ath, a name that doesn’t have any importance to Dredd but will to you and I.  Dredd asks what they were working and simply put, the scientists had developed a portal to another dimension, an entirely dead one.  They then partially opened the portal in an effort to generate energy from the transfer of matter from their dimension.  It’s all a bit psi-nonsense but that’s the story.

Dredd goes to see a lab worker who has phoned in sick that day, Penny Maxwell.  Her skin is disfigured, side effects from the experiment.  And she explains how the portal brought across the entropy from the other dimension, infecting her.  She warns Dredd not to reopen it.

Dredd notices that the awful odour in this block seems to be eminating from the apartment next to Penny’s and so he goes into investigate.  He finds the dead body of Eddie Vader there but then a spirit emerges and enters Vader’s body.  He stands up and asks Dredd what he fears.   Vader is now a host body for Judge Fear who, in this universe, doesn’t have his usual masked helmet and instead has an elongated face with tilted eyes.  He then leaves through a television set.  Kind of like The Ring but in reverse.

Next door, Penny throws up, collapses and then wakes up.  Her voice too has changed, indicating that she’s also a Dark Judge now.  The general rot and decay on her and her apartment suggesting that she’s Judge Mortis’ host body now.

Dredd, has somehow followed Fear into the television and ends up in a paranoid delusion where he is a beggar on the street and the people hate him.  He snaps out of that.

In the next part of the story, we see a flashback to Sidney De’Ath leading on the portal experiment.  The scientists open the portal but a dangerous level of energy is detected and they close the portal as quickly as possible.  However, Judge Death’s spirit, that was fighting to stay in his own, dead dimension, has been carried through along with Fear, Fire and Mortis.  But that’s not the only consequence of opening the portal.

The Dead World, a mirror image of Earth, has appeared in the atmosphere, upside down and up in the sky.  Dredd goes back to investigating what is happening but is blasted off of his bike by Judge Fire (probably the most on-fire version of Judge Fire we’ve ever seen).   Dredd (somehow) recognises him as the perp he iced earlier.  This is confusing because Dredd didn’t kill the arsonist, he killed himself.  This all takes a couple of reads to figure out.

You see, at this point the girl that is the host for Judge Death is being called Sidney.  Eddie Vader, the host for Judge Fear, is being called Patrick (another of the missing scientists).  Because we’re used to our usual Dark Judges completely rejecting their hosts’ identities, this is initially confusing.   This part of the story ends with Sidney/Death killing a Judge, Zutter, and Patrick/Fear sensing that Judge Fire has lost his body after Judge Dredd blows him apart with some hi-ex rounds.

Dredd catches up with Fear, Mortis and Death.  Fire turns up in a new body, the body of a child (dark!).  Dredd battles them.  As Judge Fear attacks, a voice comes from him asking for help.  Death destroys Fear’s body.  He explains that as Sidney he was pulled over to the Dead World with three colleagues and that he wanted to stay and they didn’t.  He enjoyed the silence and peace of that world but when he was forced back to Mega-City One but brought back the spirits of the Dark Judges with him.

Dredd manages to neutralise Mortis and Fire but Death climbs out of his body (again, not standard Judge Death behaviour).  Dredd realises what he has to do and takes an elevator up in one of the skyscrapers.  The Dead World is now practically touching Mega-City One and he’s looking to cross over.  As he reaches the top, Death catches up to him.  Dredd leaps across.

The Dead World is powered by energy and Dredd’s own will is a form of it.  It starts draining his hope.  Anderson reaches out from Mega-City One, telling him to watch out for that and to keep going.  He does and runs into Death once more but this time he has gathered together many bodies to create one larger host body.  With no ammo to defeat him, Dredd realises that his only goal is to slow him down long enough for the two worlds to separate.  He does this but doesn’t take his chance to portal jump back to Mega-City One.

The story ends with Dredd as the sole lawman on Dead World.  Patrolling the empty cities.

Confusingly, this was reprinted as Final Judgement which contains this story and one other.  There was also a super special signed limited edition version too but we’ve all missed that one unless you want to spend a lot of money on eBay. 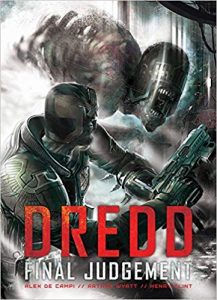