First published in Villains Take Over special in 2019.

The Judge Who Laughs is a six page story that was published in 2000 AD’s ‘Villains Take Over’ special.  Both the writer and the artist are new to the Judge Death character but you wouldn’t know it as it the both do a great job here.  The story initially seems fairly ridiculous but despite the premise, Judge Death seeing a psychologist to help him sleep, it’s not really played for laughs and is a fun tale.

Henrik Sahlstrom’s art is superb here.  Detailed and vivid, it almost feels like you’re reading in high definition.  It looks so good.

It’s set in 2118.  We’re not sure where exactly that places it in the timeline but given that current Judge Death is off-world tearing up the Dominion colony, we’ll class this as an alternate timeline story.  Especially as we don’t recall Judge Death ever being captured in a body.  Regardless, The Judge Who Laughs is definitely a story worth checking out.

This story begins with Judge Death breaking out of containment.  He kills one Judge and escapes three others but rather than leave the facility he goes to see the ironically named Doctor Hiser (her surname giving Death plenty of opportunity to add some extra esses), a psychologist who works in the facility.

He explains to her that he is having problems sleeping and that his dreams have been troubling him.  He discusses how happy and at peace he was after he purged his home planet but how since then he keeps being thwarted by Anderson and, most troublesomely, Dredd.  He doesn’t understand why he’s never been able to kill Dredd and explains that he keeps showing up in his dreams.

The doctor asks him if maybe the reason why he hasn’t killed Dredd is because he doesn’t want to.  That maybe he admires the fact that Dredd has killed so many people over his career (more than smallpox, according to Hiser).  Death agrees, sensing that they’ve made a breakthrough.

He then kills the doctor before being trapped by Dredd and two others.  He then says to Dredd “yes, the darkest Judge.  Sweet dreams.”

This is only available as part of the Villains Take Over special which is available directly from 2000 AD’s shop.  The physical edition is out of print but the digital version is just 99p. 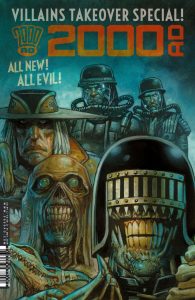