This standalone story is an enjoyable Judge Dredd story but one that re-tells that now slightly overused plot of one of Mrs. Gunderson’s Judge Death actors going mad.  If you don’t know what that means, after Necropolis Judge Death ended up renting a room in Mrs. Gunderson’s apartment.  Since then, Mrs. Gunderson, a loveable old lady with terrible eyesight and hearing, has been supplementing her income by turning Death’s old room into a tourist attraction and has using actors to impersonate Judge Death for it.

In previous stories, Turned Out Nice Again and Death Becomes Him, we saw how that role can turn the actors mad and this is another one of those.  Because we’ve seen it a few times, the effect is lessened a bit now but this is a fun story, with a different setting to usual.

As Judge Death isn’t actually in it, this isn’t essential reading but it’s an okay story.  The emphasis here is on humour so it is very much a middle-period John Wagner effort.    It’s well-written though and Ian Gibson’s art here is really nice.  It’s pretty cartoony but has a nice clean, and colourful, aesthetic.

The Marriage Game is set during the recording of a TV show of the same name.  It follows the same format as the UK dating show Blind Date in that three contestants line up to be asked questions by another who then picks one of them.  But instead of a date, this show ends in an instant marriage.

The host brings out the three contestants, three ladies who all seem a little odd.  One is  a four-time widower whose husbands keep dying on her, another is a huge bodybuilder and the last is a nervous lady who likes to knit.

The groom-to-be is Troy, Mrs. Gunderson’s latest Judge Death impersonator who has come dressed as the superfiend himself.  He begins asking his questions, immediately creeping out all of the women.

Meanwhile, Judge Dredd is watching remotely and checks the audience.  A wanted gunman is in attendance and so Judge Dredd goes to apprehend him.  Troy eventually picks the nervous knitter lady but tries to bite her as soon as she is revealed.  He then begins strangling the vicar.

Dredd eventually catches up to him once the vicar is dead.  He subdues Troy but doesn’t kill him and then attempts to discuss the all too common problem of her actors going mad with Mrs. Gunderson.  She, as usual, mishears pretty much all of it though and ends up instructing her robot, Walter, to talk to her about it later.

We can’t find a reprint of this one, so you’ll need to go straight to the Megazine for this one.  Get it from the 2000 AD store directly. 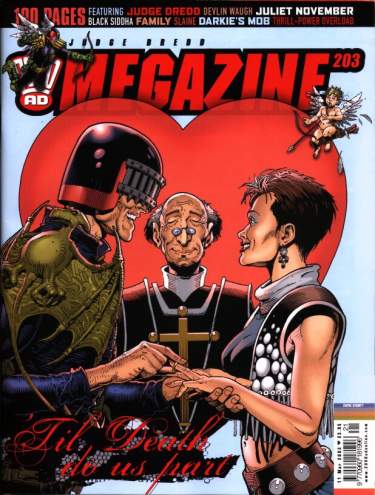