Judge Death’s post-Necropolis showings in the 2000 AD universe for a long time were either cameos, flashbacks or short tales where he escaped and was then put back in captivity before he can do any real damage. It would be five years before he’d have a truly meaningful role to play in 2000 AD and that was in this story, The Three Amigos.

It had a five Megazine run in 1995, written by creator John Wagner with art from series newcomer Trevor Hairsine who does a great job with some fantastic, detailed artwork.

The story is pretty good but we’re firmly in Judge Death’s comic relief era here and the story is pretty far-fetched. It’s a good read though, even if Death feels like he is far too restrained and given lower billing than Dredd and Mean Machine. It is worth tracking down though. 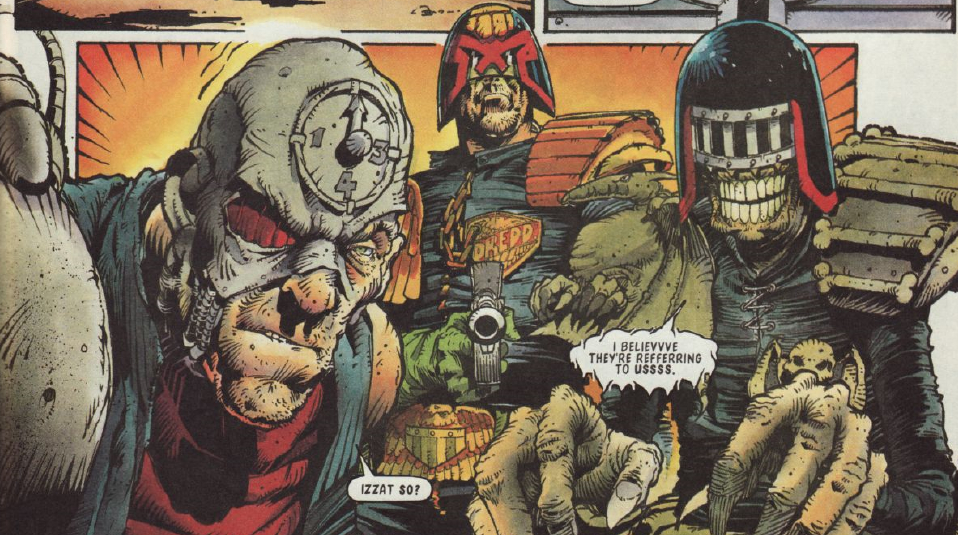 Set in the Radlands of Northern Texas, this tale sets the scene by showing you the unofficial President, Clinton Box, tearing through the region with his army of Red Trousered goons.

He’s terrorising the good normal folk and when Dredd himself turns up, you think this will be a straight forward arrest. That is until you realise that Dredd has Judge Death and Mean Machine with him, and he’s referring to them as his amigos.

They head straight for the bar, ignoring pleas for help from the people and instead offering to join with Clinton Box. It’s a tough sell but Dredd insists he’s there to join Box after running into trouble back in Mega-City One.

The President is sceptical but Dredd points out that he must be telling the truth if he’s prepared to team up with Judge Death and so they decide to give him a chance.

We then find out that this is a ruse, that he has to infiltrate Box’s inner circle desperately. So much so that he’s prepared to offer a deal to Judge Death to join him and if he does, he’ll release all four Dark Judges to another dimension. He also tells Mean Machine that he’ll release him and his family too.

This uneasy alliance continues and then Death finds out that Box has controls of 300 nuclear warheads. That’s why Dredd needs their help but, of course, the chance to dispense his form of justice to millions of people all in one go is too tempting for Judge Death who decides it’ll be much more interesting to launch a nuke at Texas and figure out springing his lieutenants some other time.

Dredd attempts to stop him by destroying his body and so Death takes over Mean Machine but struggles to control him and Mean Machine is able to make himself abort the nuclear launch just in time.

Dredd tidies up the situation by trapping Death’s spirit in yet another suction trap and he rewards Mean Machine by releasing him and his family from Mega-City One but through a door that leads straight out into the ocean, so when they attempt to come back in, Dredd arrests them for re-entering the city.

You have a couple of options here.  You can either pick up the Judge Death: Case Files 23 which contains a bunch of non-Death stories or you can pick up The Three Amigos as a dedicated release.