The Torture Garden follows on from Dominion as the latest entry in the Judge Death lineal timeline (as of the time of writing, Feb 2020).  In previous stories the Dark Judges were cast out into space but then picked up by a supply ship, Solips.  There they infiltrated the crew, destroying them in the process, before landing on Dominion, an off-world colony.  There they savagely eradicated life on the whole colony save for Rosco, a young police office, and a handful of prisoners.

Dominion ended with the Dark Judges, minus Fear who was captured by Anderson and Dredd during Dark Justice, in control of the colony and believing everyone was dead or captured until Judge Death finds some footprints in the ground.  Which is where this story picks up.

We’re not sure why David Hine took over from John Wagner on writing duties for this story but it doesn’t hurt it at all.  Hine does a great job of analysing and further dehumanising the Dark Judges.  There are some incredibly dark looks into their personality, even by the standards that Wagner previously set.  It does help also that Nick Percival remains on art duties.  As with Dark Justice and Dominion, his artwork here is incredibly good.  Some of the best we’ve ever seen.

The story is notable also for introducing another Dark Judge, Whisper, who doesn’t appear to be linked to the character of the same name in Fall of Deadworld.

The Torture Garden begins where we left off at the end of Dominion.  Nearly everyone else is dead and Rosco is in hiding.  The Dark Judges find the footprints she left and they follow.  The find someone sat in a chair but when they get there, it’s a corpse and Rosco has wired it up to explode.  The explosion damages their bodies but not really enough to slow them down, although the damaged face of Judge Death here is one of the best comic panels ever drawn.

She hears them plot to find her but after they have killed everyone else on Dominion.  And then when she’s dead, they will go back to Earth to continue their mission to eradicate all life there.  She decides that whatever happens, that can’t be allowed to happen.

Rosco returns to the Solips and contacts Chief Judge Hershey.  Hershey tells her that help is coming but that it’ll take six months to get there.  Meanwhile, Hershey wants the Solips destroyed so that the Dark Judges cannot escape.  Rosco duly obliges, blowing it up much to the chagrin of the Dark Judges who have three human survivors with them.  They ask them if one of them wants to live a little longer by giving them intel.

With six months to survive, Rosco hides in the tunnels underneath the colony.  There are flesh eating creatures down there which she calls stink bugs.  She begins to hunt and eat them for sustenance.

The Dark Judges go to the medical facilities in the colony base and use the auto-heal to repair their broken bodies.  This seems to give them a boost of power and strength, making them even harder to kill than normal.   Rosco notices this and sees that they are getting restless, desperate for someone to kill.

Elsewhere, we see the incoming marines on their ship.  They are under orders to kill the Dark Judges or resort to a failsafe, which is a one gigaton bomb.  While this is essentially a suicide mission, they are the best trained and best armed soldiers possible.  They are under the leadership of Lieutenant Rafe Sabatini, a telepath.

Rosco has been keeping tabs on the Dark Judges.  She notes how they have been creating large, strange structures that tower over the scenery.  She realises that they are there to create music of sorts.  As the wind blows through the holes in these structures, it creates sound much like an organ but those sounds remind Death of the howls of the dying.  She also questions why they’ve taken prisoners but then she realises.

Every ten days the Dark Judges select a small number of prisoners and ask each one to explain why they should be kept alive.  One man says that he’ll keep the other prisoners in line.  A woman, Pousay Truman, tells Death that she’s a librarian and can show him around the library.  He’s not interested but when she quotes a bleak passage from ‘The Torture Garden’ he changes his mind.  He’s eager to explore the darker writings of humanity.

The remaining prisoners are told that if they can reach the tower, they will be allowed to live a little longer.  However, each Judge kills one of them.  Rosco realises that Judge Death is rationing out the remaining prisoners, allowing each Dark Judge to kill one every ten days.  This might be our favourite revelation of The Torture Garden.

Death summons Pousay to the library where he reads the rest of The Torture Garden and decides he must build his own torture garden.  Some time later it is completed.  He gives Pousay a tour of it, asking her to recite poetry to him and telling her of his lost love, the Sisters of Death.  She calls him ‘mi’lord’ which pleases him also.

There are now just a dozen prisoners left and Rosco knows the marine ship should be arriving soon, which makes this the last of Judge Death’s judgement runs.  She reaches the prisoners via the tunnels and tells them she’ll be back later with guns.  However, the man from earlier betrays them, giving them all up to the Judges.

Captured, Rosco admits she destroyed the Solips.  The Dark Judges want to punish her greatly for her crimes and so, doubling down, she asks Judge Death if he feels like he’s really dead, given that he can walk and talk.  He admits that this is a cause of torment to him and that they all want to finish eradicating life so that they can then finally rest.

He then tells the prisoners that now that his torture garden is finished, they will all be making the run.  Pousay included, as well as the man who gave them all up.  And, of course, Rosco.

On the rescue ship, the crew find that one of their number, Loomis, is dead.  Investigating, they begin to suspect their squad leader, Sabatini, is responsible and they soon realise that his medical records were hacked to allow him on the ship.  Meanwhile, he is pouring Dead Fluids onto Loomis’ dead body.  Then a spirit leaves his head and enters the body.  This is Judge Fear, back to join his brothers.

The crew suspect this also and radio back to Earth to find out if Judge Fear is still in containment.  Meanwhile, Fear then uses the Dead Fluids on Loomis, transforming him into a Dark Judge also, Judge Whisper who knows everyone’s deepest secrets.  He begins incapacitating and killing soldiers.

Elsewhere on the ship, Kovacs who is augmented with computer parts, is contacting Chief Judge Hershey who tells them that they must detonate the failsafe bomb.  The rescue ship lands on Dominion where the judgement run continues.  The soldiers exit as does Fear who is reunited with the rest of the Dark Judges.

One of the soldiers, Angelotti leaves to set the failsafe bomb elsewhere in the colony.

Later in the run, Pousay and Rosco are together when Pousay is trapped by a plant.  While freeing her, Whisper finds them and begins convincing Rosco to kill herself but is stopped when one of the soldiers shoots him.  First through the body, which slows Whisper down, and then through the head.

The soldiers and remaining prisoners are now together and the decide it is time to get off of the planet.  The man who betrayed the prisoners earlier volunteers to distract the Dark Judges, knowing that if he gets onto the rescue ship he’ll likely get killed by one of the prisoners.   He does this, getting killed by all four Dark Judges who then go off to find the rest of the humans.  Whisper is helpless on the floor, thoughts looping through what is left of his brain.

As the survivors travel through the tunnels back to the ship, the are ambushed by the stink bugs but they quickly turn their attention to the Dark Judges, preferring the rotting meat that is on their bones.

The survivors arrive back at the ship but they cannot detonate the failsafe bomb remotely as Sabatini has sabotaged the mechanism.  Angelotti has placed it in the library and so Pousay volunteers to go and detonate it manually as she knows the way there.  As she leaves, Death notices her.

Angelotti runs at the Dark Judges, buying the ship enough time to take off.  Death catches up to Pousay who is in the library.  She tells him that she hates the writing that she introduced him to, telling him that it is morbid and self-obsessed.  She shows him something uplifting by Wordsworth.  He reads it with disdain but as he does so she traps him with a canister of Boing.  Condemning him to read that passage forever.  Pousay then detonates the bomb, destroying the entire planet.

Trapped in Boing and floating through space.  Fear, Fire and Mortis presumably in spirit form, floating in space.

As of now The Torture Garden hasn’t been reprinted so you’ll need the Megazines (400-409) if you want to read it.  Which you should.  Get them from the 2000AD shop below. 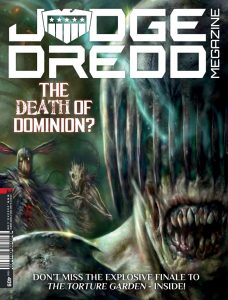