At this point in Judge Death’s bibliography, there are two main series to keep track of and both came back at the same time in late 2020.  While, at the time of writing, we’re waiting for Deliverance to conclude which is the up to date story of the Dark Judges as they terrorise colonies in space, Visions of Deadworld dips back into their origin story.  Or at least their homeworld.

Visions of Deadworld is a trilogy of standalone stories from three perspectives that show some of the horror of Deadworld, as if Kek-W hasn’t already given us enough of that to fuel a lifetime of nightmares.

Death and Co. don’t actually make any appearances in this story with Judge Whisper being the only official from Death’s administration to show up.  Oddly, at the same time Judge Whisper also appears in Deliverance but these aren’t the same two people.  At least not until someone retcons that.

Anyway, Visions of Deadworld serves as a great appetiser for a promised return to Deadworld later in the year.  Despite primarily being about the horror and misery of Deadworld, these are three varied tales and well worth checking out (although we’re assuming they’ll all show up in a future Deadworld Book Three).

This minimalistic grim tale introduces us to The Boneman, a figure that walks the wasteland of Deadworld, cursed to remember the atrocities committed there.  We don’t know how long it has been but everything has turned to dust, including Death’s Necro-City One and a huge monument that once stood a mile high.  So we’re presumably looking at it being aeons since the Dark Judges were last here.  Thinking about it, that makes this tale one from the future but with all the dimension jumping, who knows?

The Boneman patrols the world, waiting for justice to return and is haunted by memories of both the dead and an unknown woman who demanded that he would bear witness and remember.  We know that he was there when the last human was judged but beyond that, it’s unclear who or what The Boneman really is. 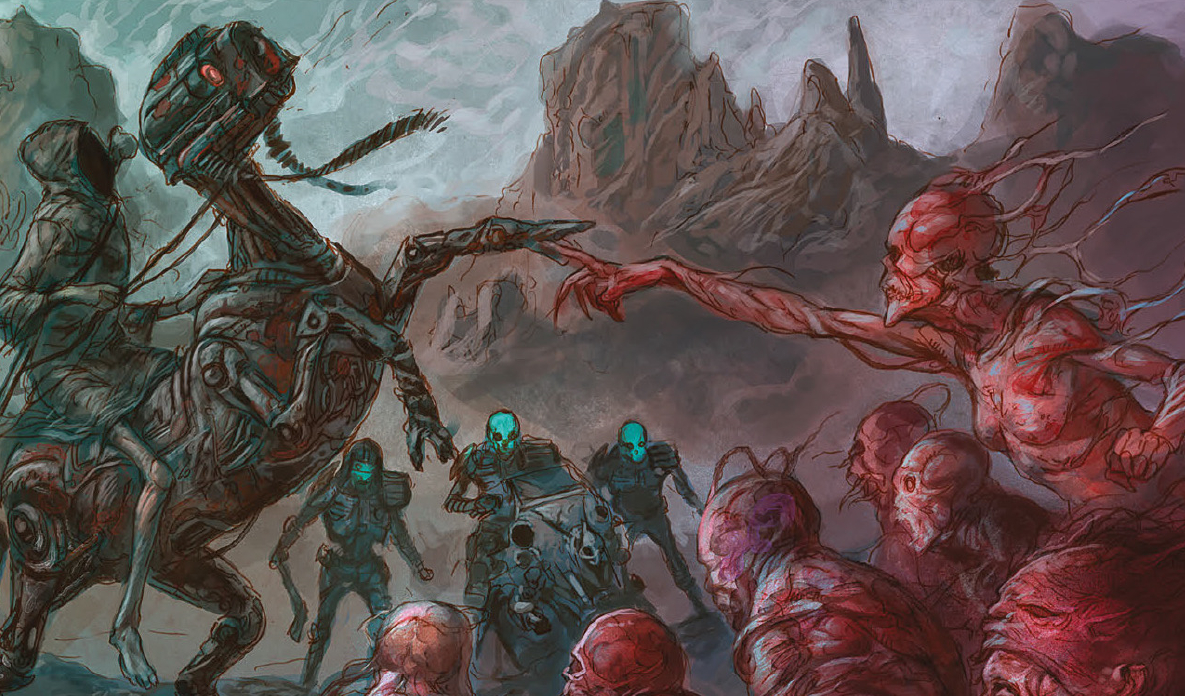 Every end of the world epic needs a story about a couple with a baby on the way and that’s what we get here.  A couple are desperately making their way across town, trying to get to a hospital.  The man, Mark, is on the phone to a someone at the hospital who reassures him and guides the couple to the hospital.

The voice comforts Mark after he has to shoot looters and some of the undead, assuring him that he’s doing the right thing for his family but things start to get weird when the man realises that he’s not even holding a phone.  His wife tells him that he dropped it earlier on.  Nevertheless, he can still hear the voice and they eventually make it to the hospital where they are met by a judge who even defends them by shooting more looters.

It turns out that he’s Lucien Whisper, the Dark Judge, and he was the voice that guided the couple there.  He then uses his considerable psychic powers to calm Mark and his wife as he performs a c-section birth.  Whisper and one of the nurses then watch as the baby, a natural future recruit to the Psi Division, eats the couple. 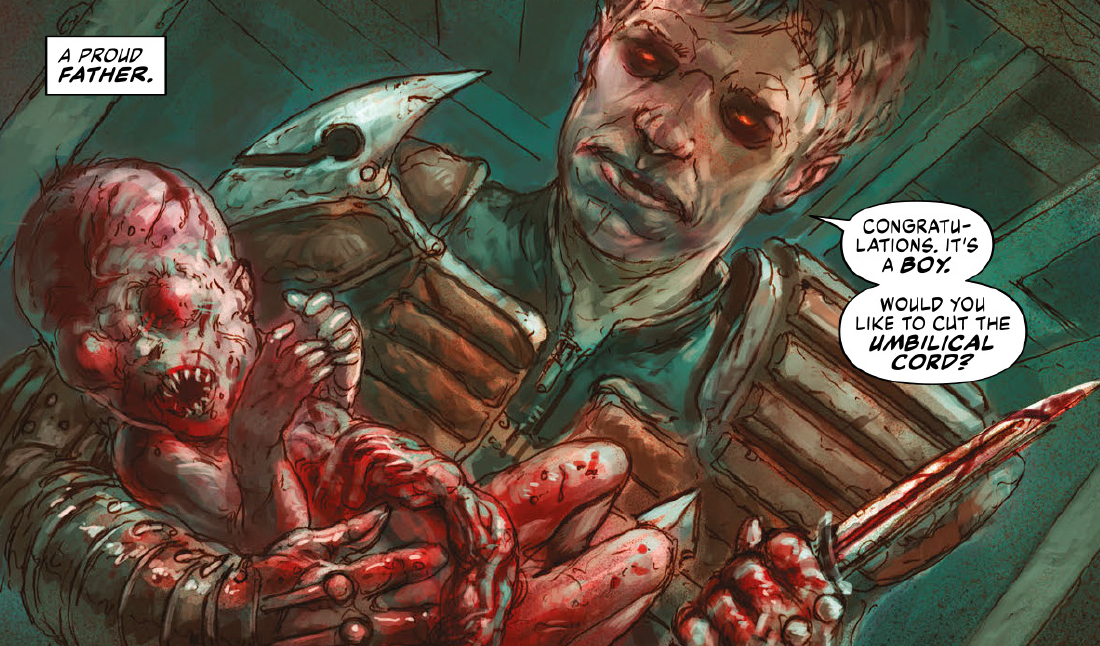 Even the horrific setting of Deadworld can produce a heart-warming tale and Kek-W delivers with this charming story about a woman, Channing, who meets a ‘Dead Head,’ one of the mindless undead that serve as the army of the Dark Judges.  However, this particular Dead Head has malfunctioned and is stuck in a loop, unable to function.  She rescues him and begins an adventure, using the poor unfortunate being, now called Jerry after her favourite guitarist (presumably Jerry Garcia, given the whole ‘Dead Head’ thing) to scan for food.

After he finds some, they are attacked but Jerry defends her before eventually finding more Dead Heads who connect with him, bringing them into their swarm.  However, Jerry’s loyalty to Channing is unbroken and he controls the swarm, supporting Channing as she continues to search for food. 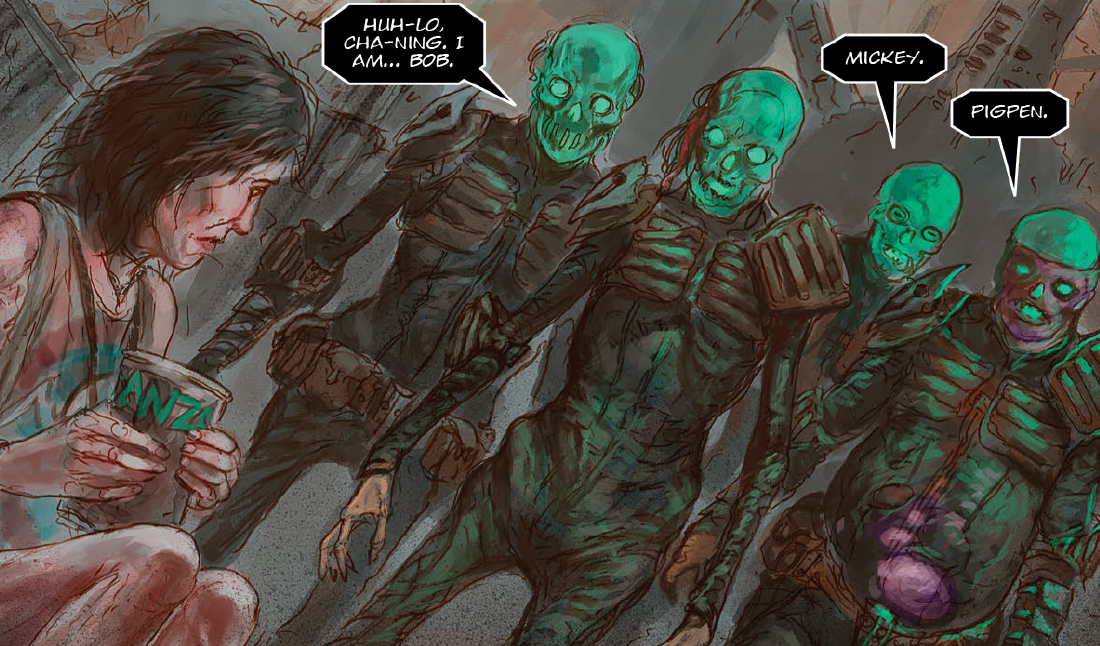 Trapped in Boing and floating through space.  Fear, Fire and Mortis presumably in spirit form, floating in space (in main timeline).

This trio of tales is brand new (at the time of writing) and so you’ll need to pick up Progs 2210-2212 to get the whole story or wait for The Fall of Deadworld: Book Three when that eventually comes out. 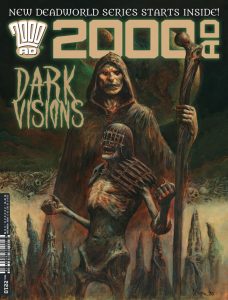